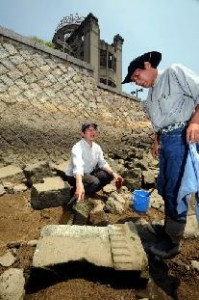 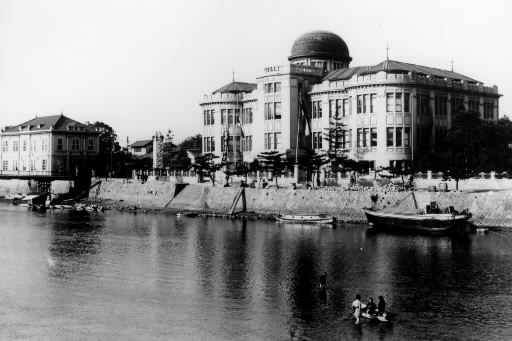 It was revealed that two railings of a balcony of the Atomic Bomb Dome, a designated World Heritage site and the former Hiroshima Prefectural Industrial Promotion Hall, still remain on the left bank of the Motoyasu River in downtown Hiroshima. This river runs beside the A-bomb Dome.

At the request of Hiroshima Peace Memorial Museum, Tokuhei Tagai, 66, professor emeritus at the University of Tokyo, who is acquainted with A-bomb stones, visited Hiroshima and examined the four processed granite stones on June 19. The Ota River office of the Ministry of Land, Infrastructure, Transport and Tourism said that “these four stones, as precious cultural assets, cannot be left as they are” and announced its intention to confer with the City of Hiroshima, which is in charge of the A-bomb Dome, on how to handle them.

At low tide, the granite stones can be seen to the north from the foot of some steps which lead down to the Motoyasu River from in front of the dome. One of the railings has virtually retained its original form of 70 centimeters in length. The decorated upper part of the railing is 26 centimeters by 37 centimeters. Judging from its volume, the weight is estimated to be about 270 kilograms. The other railing lacks the lower half. At least two other granite stones of the same material, which have carved grooves, have been found nearby.

The balcony was attached to the front of the former Hiroshima Prefectural Industrial Promotion Hall at the fifth floor and had 21 railings. Among photos taken by the late Yuichiro Sasaki, who continued to photograph the A-bomb Dome, an image captured in the fall of 1945, the year the atomic bomb was dropped, shows that the balcony had collapsed and only one decorative railing remained on the south side. Though this photo includes fallen stones scattered around the dome, other photos reveal that most of these stones were cleared away in 1949. The railing to the south was reinforced by the first preservation project in 1967 and has since been preserved.

According to the Ota River office, there are no records indicating that processed stones were discovered when the office conducted the bank protection work in front of the A-bomb Dome in 1987, draining water and digging in the riverbed for about one meter. The office said, “It seems unlikely that these stones were thrown into the water from inside the A-bomb Dome after the bank protection work. There have been no floods nearby, either. We have no idea why these stones have appeared now.”

Professor Tagai, a specialist in mineralogy, proposed, “Judging from the designs, we can be sure that at least these four stones were part of the A-bomb Dome. If these stones fell due to the atomic bombing, they themselves are ruins and should be preserved as they are now. If these stones were thrown into the water after the atomic bombing, they should be returned to the grounds of the A-bomb Dome.”