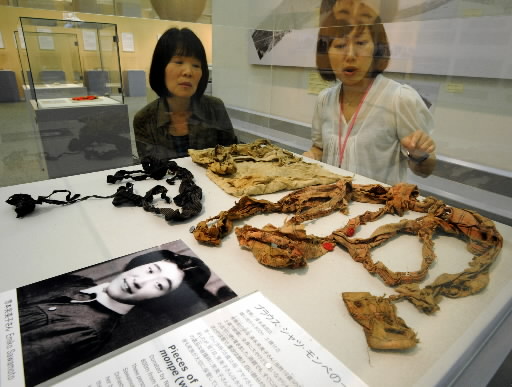 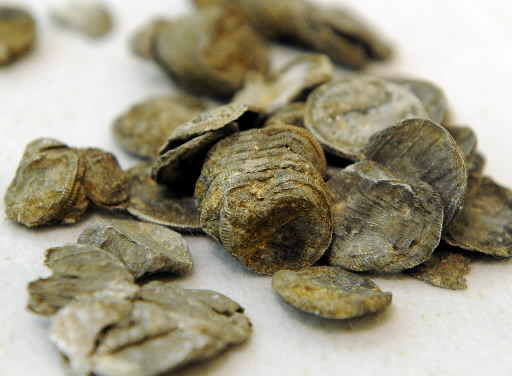 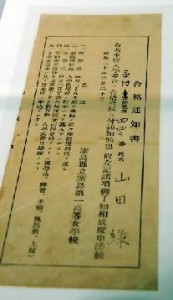 The New Arrivals Exhibit opened at Hiroshima Peace Memorial Museum on June 19. A total of 184 items, donated by 67 individuals in fiscal 2008, are being displayed in the basement of the East Building of the museum for approximately one year. The artifacts include a blouse worn by a teenager who was exposed to the atomic bombing, a lump of coins misshapen by the bomb’s heat rays, and a letter of acceptance to school sent to a girl who died due to the blast.

The burnt blouse was worn by Emiko Sawamoto who lost her life at the age of 16. She was 800 meters from the hypocenter, in the present-day Dobashi District, when the bomb exploded. The blouse was presented to the museum by Naoaki Sawamoto, 64, Emiko’s relative. Mr. Sawamoto told the museum that Emiko suffered such severe burns that her own parents were unable to recognize her. She is said to have died “craving for water” on the day after the bombing.

The bereaved family of Mitsuaki Yoshimura, who passed away at 76 this past February, donated the lump of melted coins. Mr. Yoshimura experienced the atomic bombing while at home in the downtown district known today as Funairi-nakamachi. One of his friends, staying at his home at the time, was buried under debris when the house collapsed. Mr. Yoshimura had no choice but to flee, leaving his friend behind as fire approached.

Several days later, Mr. Yoshimura found the lump of coins among the rubble of his house, from which he was unable to rescue his friend. Haunted by remorse, he seldom shared his experience of the atomic bombing. His wife, Tomiko, 62, stressed, “I hope people today can recognize the horror of the atomic bombing which stole so many away in the prime of their lives.”

Reiko Takaishi, 70, a resident of Saiki Ward, donated the letter of acceptance sent to her older sister, Midori Yamada, from the Hiroshima Prefectural First Girls Middle School. Midori, who died at the age of 12, dreamed of becoming a doctor but was exposed to the atomic bombing near the present-day Koami-cho District. She suffered extensive burns and passed away at her relative’s house that night. When Reiko was organizing some items left by her father, she found the letter in an album that was titled “Memories of Midori.”

The exhibit featuring donated artifacts is the 14th since 1996. The number of contributors has been decreasing annually from the peak of fiscal 2004, in which donations from 137 individuals were received.