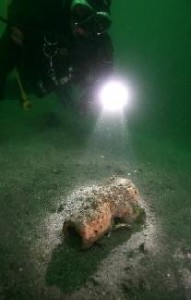 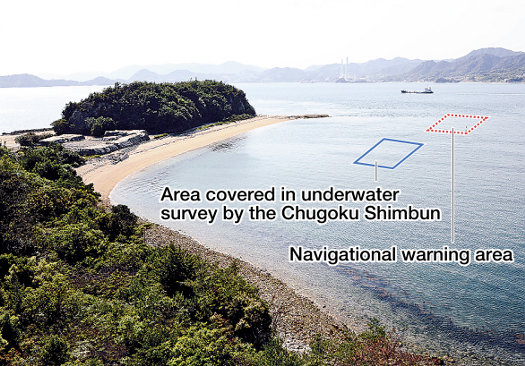 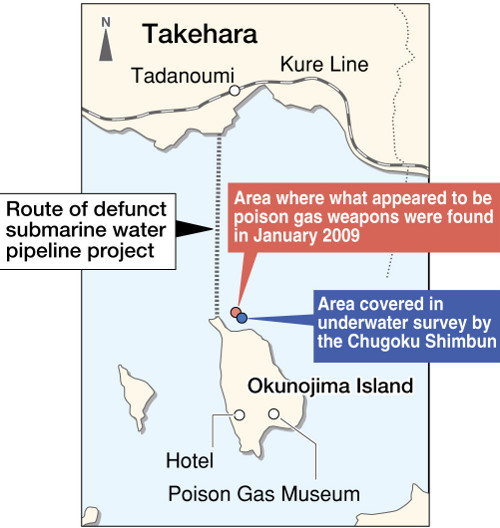 Through an investigation conducted in the Seto Inland Sea through June 20, the Chugoku Shimbun has confirmed the existence of 15 suspicious objects at the bottom of the seabed off the coast of Ohkunoshima Island in Hiroshima Prefecture. Experts on chemical weapons have indicated that these objects, due to their shape, may be poison gas munitions from World War II. The objects were found near the spot where similar masses of iron believed to be poison gas weapons were discovered in January of this year.

Ohkunoshima Island was once the site of a poison gas factory run by the Imperial Japanese Army and a large number of suspicious objects still lie on the seabed surrounding the island.

On June 2 the Chugoku Shimbun team surveyed the sea about 60 meters north of Ohkunoshima Island. We took photos and shot video of a 30-square-meter area at a depth of 10 to 20 meters. This area is about 30 meters to the east of the spot where 20 questionable objects were found this past January when the Ministry of the Environment was conducting a survey in preparation for the construction of a water pipeline under the sea. The Kure Maritime Safety Agency has issued a warning against navigation in the area surveyed by the ministry.

The newly found objects are about 20 centimeters long and no larger than 10 centimeters in diameter. All of the objects are similar in size and appear to be iron masses. Scattered and buried under the sand, they are badly corroded and crusted with rust and sea shells.

Some of the objects have a clear cylindrical shape and show close similarity to so-called “red canisters,” the Imperial Japanese Army’s poison gas munitions formerly discovered along the island’s northern coast.

After studying photos of these objects, Keiichi Tsuneishi, professor at Kanagawa University and an expert on chemical weapons, judged it highly likely that the objects are also red canisters. “Red canisters contain arsenic, which is extremely toxic,” he said. “Since they might wash up on the beach, they should be removed and further investigation of the area is essential.”

The Chugoku Shimbun reported its findings to the 6th Regional Maritime Safety Headquarters based in Hiroshima and to the Environment Ministry through Hiroshima prefectural government. The Regional Headquarters sent the photos to the Japan Maritime Self-Defense Force (JMSDF) Regional Kure District Headquarters. In response to our inquiry, the JMSDF Kure Headquarters responded that the photos do not offer sufficient detail for them to identify the objects.

The Environment Ministry confirmed 20 suspicious objects and metallic reactions in 367 places when it studied the area in connection with the project to construct a 2.4 kilometer-long water pipeline linking the northern part of the island with the town of Tadanoumi on the mainland. Eventually, the ministry abandoned the project into which 435 million yen had already been expended, saying such a project could prove dangerous.

The ministry’s poison gas information center will hold its regular panel meeting on June 22. The panel is comprised of experts on chemical weapons and environmental protection. They will discuss measures for ensuring the safety of local residents in relation to the objects found on the seabed around the island.

Ohkunoshima poison gas manufacturing plant
The plant opened in 1929 as the Tadanoumi Weapons Manufacturing Plant under the jurisdiction of the Imperial Japanese Army’s arsenal and pyrotechnics division. Blister gas, or mustard gas called “Yellow No. 1,” tear gas “Green,” and sneeze gas “Red” were among the products of this plant. According to U.S. Army data, this plant produced 6,616 tons of poison gases.