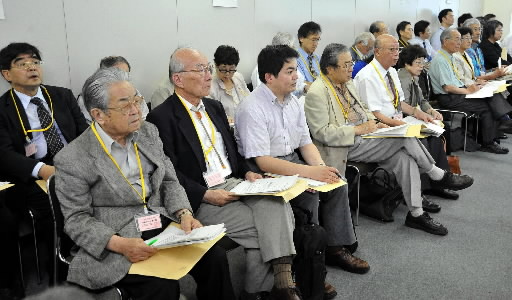 On June 22, a 31-member medical subcommittee of the Ministry of Health, Labor and Welfare (MHLW), which had been considering the further relaxation of the A-bomb disease certification criteria, added impaired liver function and thyroid dysfunction to the list of A-bomb diseases for “immediate certification.” These illnesses are now recognized to have been induced by the radiation from the atomic bombings.

At the meeting of the medical subcommittee held at MHLW, the members, including a former judge and doctors, presented the view that “The legal judgment should be taken seriously,” in light of the May 28 Tokyo High Court ruling that recognized the two illnesses of impaired liver function and thyroid dysfunction as A-bomb diseases. There was no opposition to this opinion.

Hideki Taniguchi, chair of the subcommittee and chief of the First Department of Surgery at the Japanese Red Cross Nagasaki A-bomb Hospital, led the discussion concerning the court rulings that have recognized the plaintiffs’ illnesses as A-bomb diseases as long as radiation, as the cause, cannot be definitively denied. He summed up the committee’s stance, saying, “Even though the court rulings are not strictly in accord with scientific views, we must respect the legal judgment as members of a law-abiding nation.”

Since April 2008, five diseases, including cancer, leukemia, hyperparathyroidism, radiation-induced myocardial infarction, and A-bomb cataracts, have been included in the list of A-bomb diseases for immediate certification, assuming certain conditions.

The addition of the two illnesses to the list of A-bomb disease certification criteria has been one of the five requests by the plaintiffs, including the Japan Confederation of A- and H-bomb Sufferers Organization, to the Japanese government in their attempt to seek a collective settlement of the class action lawsuits. However, the subcommittee has maintained its stance that all the diseases “must be certified as induced from radiation” to be recognized as A-bomb diseases. The focus will be on how strict the screening of application materials for A-bomb disease certification will be in the future. The plaintiffs criticize the decision of the subcommittee, believing “it will end in the limited recognition of A-bomb diseases.”

Hidenori Yamamoto, 76, the leader of the nationwide group of plaintiffs involved in the class action lawsuits over A-bomb disease certification, argued, “It’s possible that the additional two diseases will still not be recognized as A-bomb diseases due to certain conditions. We must begin a new campaign seeking another revision of the certification criteria. A collective settlement of the lawsuits seems unlikely.”

Meanwhile, Chief Cabinet Secretary Takeo Kawamura praised the revision of the certification criteria. He then commented on the settlement of the lawsuits in line with a political decision by Prime Minister Taro Aso expected to be made by the anniversaries of the atomic bombings: “We are holding discussions within the MHLW to create an environment conducive to a settlement.”