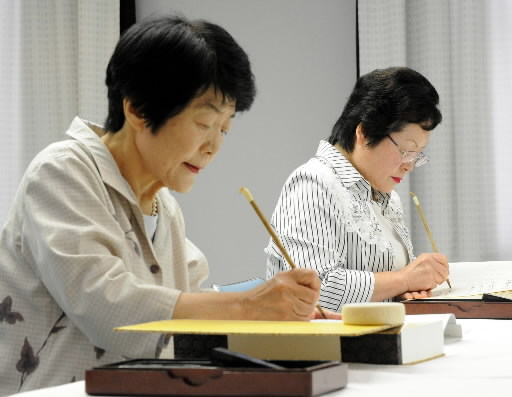 On June 23, the City of Hiroshima began the work of adding the names of atomic bomb survivors (hibakusha) who have passed away or whose deaths were confirmed since August 6 of last year to the register for A-bomb victims. The register will be dedicated to the Cenotaph for the A-bomb Victims during the Peace Memorial Ceremony on August 6.

Kazuko Ikegame, 67, and Nobuko Nakamoto, 66, hibakusha and former city employees, are in charge of writing these names into the register and they began their work in a room at the Naka Ward Community Welfare Center. At the writing desk covered with a white cloth, the two women first put their hands together in prayer for the souls of the dead. Then, using brushes and ink, they began writing the name, age, and date of death of each hibakusha.

This is the 9th straight year that Ms. Nakamoto has taken on the task of writing the names of the deceased into the register. “Today is the anniversary of the end of the battle of Okinawa,” she said softly. “As I add these names to the registry, I pray for a world without nuclear weapons and war.”

As of last year’s Peace Memorial Ceremony, the names of 258,310 people had been written into the 93 volumes of the register. Since that time, the deaths of 3,210 hibakusha have been newly confirmed. Until August 5, the City of Hiroshima is accepting applications from the families of deceased hibakusha for further registrations. For more information, call the Atomic Bomb Survivors Relief Department of the City of Hiroshima at 082-504-2191.