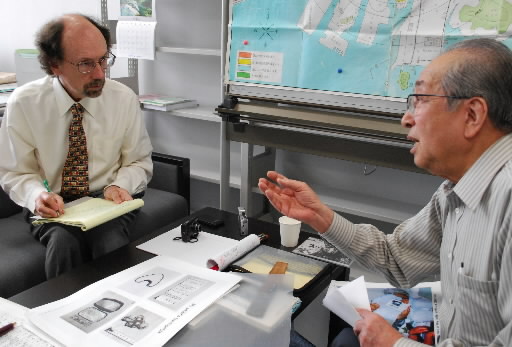 Freelance journalist Joseph Copeland, 60, is back in Hiroshima as a reporter and has been posting news stories at his blog called Hiroshima Stories. Mr. Copeland, from the U.S. state of Washington, visited Hiroshima and Nagasaki in 1986 as one of the journalists invited to cover the consequences of the atomic bombings firsthand through a program called the Hibakusha Travel Grant for American Journalists, informally known as the Akiba Project.

This time, Mr. Copeland has been granted a Fulbright scholarship and he arrived in Japan in mid-May. Since then, he has interviewed A-bomb survivors (hibakusha) including Koji Hosokawa, 81, and Suzuko Numata, 85, both of whom reside in Hiroshima. He has also covered how people of Hiroshima reacted to the nuclear tests conducted by North Korea. He will stay in Japan until the end of August.

Mr. Copeland was originally invited to Japan in August 1986 through the Akiba Project, which was sponsored by the Hiroshima International Cultural Foundation, when he was a reporter for a newspaper based in the state of Washington. He covered the Peace Memorial Ceremony and conveyed interviews with hibakusha. Mr. Copeland transferred to the Seattle Post-Intelligencer in 2002 and was an editorial writer until that paper closed in March 2009.

“People don’t have much interest in peace and nuclear-disarmament issues in the U.S., and the amount of media coverage of peace-related issues is limited in local newspapers,” Mr. Copeland said. “Hiroshima is calling for peace and the abolition of nuclear weapons from a broad perspective. I hope this attitude will spread among the U.S. citizens,” he added.

The Akiba Project
Sponsored by the Hiroshima International Cultural Foundation, American journalists were invited to Hiroshima and Nagasaki so that the reality of the atomic bombings could be reported through their U.S. media outlets. The project was formally called the Hibakusha Travel Grant for American Journalists, but was commonly referred to as the Akiba Project since it was proposed by Tadatoshi Akiba, now mayor of Hiroshima, when he was an associate professor at Tufts University in the United States.