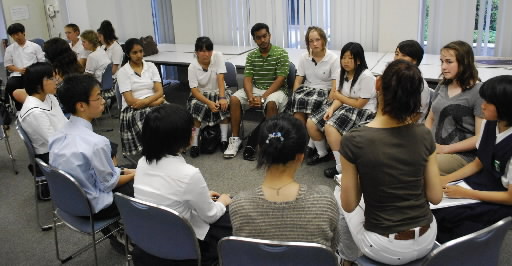 Fifteen junior high and senior high school students in Hiroshima held a discussion on June 27 with about 20 American students studying in and around the city. They exchanged ideas on the possibility of abolishing nuclear weapons. The Japanese students have been engaged in activities to invite U.S President Barack Obama to Hiroshima. After the discussion with the American students, they held a meeting and decided the group’s name.

Asked, by a Hiroshima student, whether they think nuclear weapons can be eliminated, one of the American students answered, “Nuclear weapons technology has already been established so I think it would be difficult to completely eliminate them from the world.” On the other hand, some American students spoke more encouragingly, saying such things as “The abolition movement is vital to prevent nuclear weapons from being used again” and “I will share the efforts that Japanese students are making when I go back home.”

At one point, the Hiroshima students were surprised to hear one of the American students say, “I’ve heard there’s still residual radiation in Hiroshima.”

After the discussion, the Hiroshima students held a meeting and decided the name for their group, which is seeking to have President Obama visit Hiroshima: "The No Nuke Network: Students of Hiroshima Against Nuclear Weapons." They decided to include the expression “No Nuke” as this phrase is often used in antinuclear movements.

The group hopes to first unite junior and senior high school students in Hiroshima to work toward the elimination of nuclear weapons, then expand their activities to other parts of Japan and overseas. For the time being, they will focus on the immediate goal of Mr. Obama’s visit to Hiroshima, and other concrete actions will be decided in the near future.