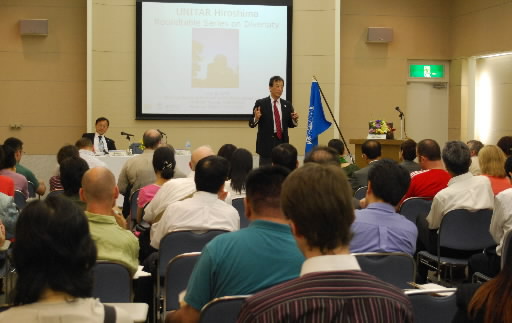 The United Nations Institute for Training and Research (UNITAR) Hiroshima Office hosted a symposium titled “What can Japan do to create a knowledge-based society?” at Hiroshima Peace Memorial Museum on the evening of June 26. University students and non-Japanese living in Hiroshima were among some 80 people present at the symposium, which tried to redefine the roles Japan and Hiroshima can play in this increasingly diversified society.

Kiyoshi Kurokawa, former special advisor to the Cabinet and professor at the National Graduate Institute for Policy Studies, said, “In this global community, where more and more countries are interconnected with one another, if Japan is to make a significant contribution, each of us must expand our network in and out of the country and accept more diverse values.”

Shigeru Miyagawa, professor at the Massachusetts Institute of Technology, noted the role of Hiroshima, saying, “Hiroshima can kindle hope for people of all countries, such as Afghanistan.”

Professor Kurokawa added, “At this time, when nuclear weapons are proliferating and the use of nuclear power is increasing, Hiroshima must get its message out. Hiroshima should make all sorts of efforts so that its message will be better received in other countries.”