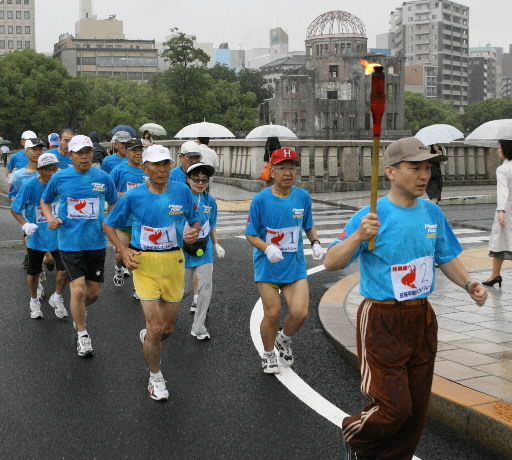 Participants in the “Torch Relay for Nuclear Abolition and Peace” kicked off their appeal for the elimination of nuclear weapons by departing from Hiroshima Peace Memorial Park on July 1. A total of about 5,000 people are running the relay course of roughly 1,000 kilometers, covering all 23 municipalities in Hiroshima Prefecture. The last group of runners will finish the event by returning to the park on July 24.

Amid drizzling rain, the departing ceremony was held in front of the Cenotaph for the A-bomb Victims where 15 people, serving as the first runners, offered silent prayers. After a torch was lit with the “Flame of Peace” located near the cenotaph, the runners started the relay at 8:15 a.m., the time the atomic bomb was dropped, with one runner holding the torch aloft.

One of the first group of runners, Noriaki Kaneda, 61, an office worker and a resident of adjacent Hatsukaichi City, shared his determination, saying, “I’m worried about North Korea’s nuclear development. I intend to pray for the abolition of nuclear weapons as I run.” On the first day of the relay, about 100 people passed the torch within the city limits of 47 kilometers.

This is the 28th event sponsored by the Hiroshima Prefecture Youths and Women Peace Friendship Festival Planning Committee, comprised of labor union members and others.