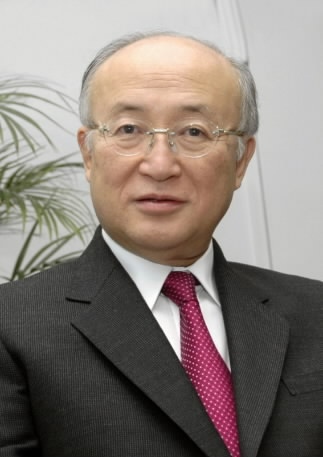 Japanese Foreign Minister Hirofumi Nakasone said Friday he was happy that Yukio Amano was elected as next director general of the International Atomic Energy Agency and vowed to offer backup to the U.N. nuclear watchdog.

''As the only country to suffer atomic bombings...it is natural that we offer steady backup in various aspects'' when Amano, who is from Japan, formally becomes the director general, Nakasone told reporters a day after the election.

But on whether Japan will specifically extend financial assistance to the IAEA, Nakasone said only that he would like to ''monitor the situation from now on.''

The 62-year-old Japan's ambassador to the Permanent Mission to the International Organizations in Vienna on Thursday received the required two-thirds majority of votes cast, making him the first IAEA chief from an Asian country. The voting was held by the 35-member IAEA Board of Governors.

Amano's four-year term as director general will start in December, after formal approval expected to be given its annual general meeting in September.

Challenges apparently facing him after taking the post are the Iranian nuclear issue and the nuclear ambitions of North Korea, which conducted its second nuclear test recently.