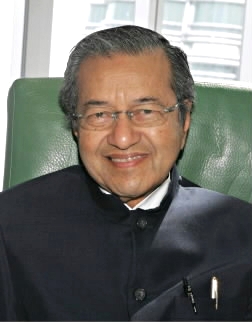 It was learned July 3 that Mahathir bin Mohamad, 83, former prime minister of Malaysia, is planning to attend the Peace Memorial Ceremony to be held in Hiroshima on August 6. Mr. Mahathir is coming to Japan to speak in Fukuoka on August 4. He was quoted as saying he would like to attend the ceremony while in Japan and pledge his efforts toward the elimination of nuclear weapons.

According to the Citizens Activities Promotion Division of Hiroshima City, no president or prime minister from outside Japan has attended the ceremony to date, and there is no record of former prime ministers attending the ceremony, either. The city will welcome Mr. Mahathir and discuss what role he could be asked to play during the ceremony.

Mr. Mahathir held the post of prime minister of Malaysia for 22 years, from 1981 to 2003. He promoted the Look East Policy, which aimed to learn from the economic development of Japan and South Korea. Since 2005, he has been Chairman of the Perdana Global Peace Organisation, a nongovernmental organization which appeals for the renunciation of war.

Mr. Mahathir will give a speech on August 4 in Munakata, Fukuoka Prefecture. The event is organized by Japan Future Leaders School, chaired by Fujio Mitarai, chairman of Nippon Keidanren (the Japan Federation of Economic Organizations). After the event, Mr. Mahathir will come to Hiroshima for two days, August 5 and 6.

According to the office of Japan Future Leaders School, Mr. Mahathir himself expressed his wish to attend the Peace Memorial Ceremony now that the movement for the abolition of nuclear weapons is gaining global momentum in the wake of U.S. President Barack Obama’s call for “a world without nuclear weapons.” Mr. Mahathir is also planning to visit Hiroshima Peace Memorial Museum.