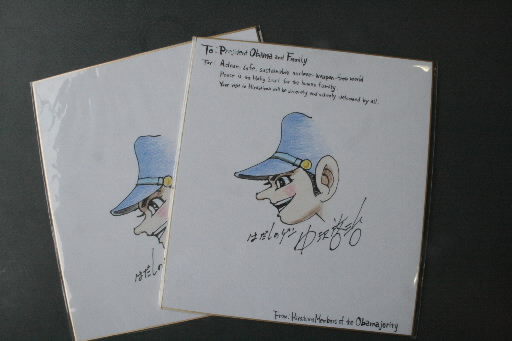 Keiji Nakazawa, 70, manga artist of the manga series “Barefoot Gen,” is planning to send messages to U.S. President Barack Obama inviting him to visit Hiroshima. Mr. Nakazawa, now a resident of a city near Tokyo, will send two cards sporting the messages, along with the English version of the manga series, comprised of 10 volumes and expected to be completed this month. “Barefoot Gen” is the story of a boy who survives the atomic bombing of Hiroshima and lives through its aftermath.

On July 26, Mr. Nakazawa will request that the participants of a celebration marking the completion of the English version of the manga series write messages on the cards.

Two message cards have been prepared and Mr. Nakazawa drew the face of the main character “Gen” in the center of each of the cards. On one card, he also wrote this message in English: “A clean, safe, sustainable nuclear-weapon-free world; Peace is the Holy Grail for the human family; Your visit to Hiroshima will be sincerely and warmly welcomed by all.”

About 100 people, including the translators who rendered the series into foreign languages, others involved in the project, and fans of the artist will take part in the gathering. Each person will write his or her message around the illustration in the center of the cards. Mr. Nakazawa plans to provide President Obama and his family with all 10 volumes of the English version through a church in Washington D.C.

Mr. Nakazawa said hopefully, “I would like the president’s two daughters to read the series first and then the family might talk about the story among themselves at home. Through the boy, Gen, I wish to convey the horror of nuclear weapons and the significance of a visit to Hiroshima by the president.” The celebration will start at 11:30 am on July 26 at the Melpark Hiroshima.