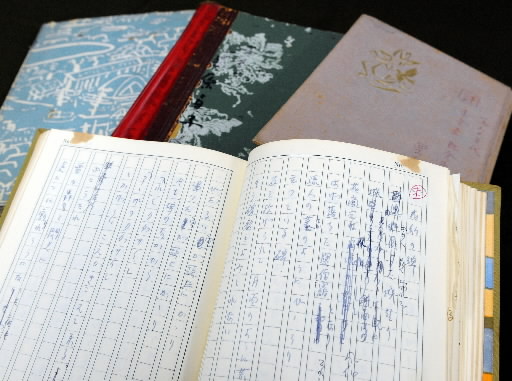 Hiroshima Jogakuin University in Higashi Ward, Hiroshima announced on July 8 that the university has found 86 unpublished poems created by Sadako Kurihara (1913 - 2005), a writer of A-bomb-related works. In 2008 a collection of materials held by Ms. Kurihara were donated to the university.

Ms. Kurihara, the author of "Umashimenkana" ("We Shall Bring Forth New Life"), is well-known as a writer dedicated to social issues, particularly anti-nuclear and peace campaigns. Many of the newly found works are lyrical poems which reflect her family and her inner life, serving as valuable sources for understanding her deeper nature.

The unpublished poems were found in four notebooks she used to write her manuscripts. These notebooks appear to contain works that were created in the 1960s and later. The pen-written manuscripts show her repeated efforts to polish her poems. Some of the manuscripts are marked at the top to indicate that they were not published.

After visiting Mt. Sanbe in Ota City, Shimane Prefecture, she expressed her feelings toward nature and, in another poem, she revealed the emotions of motherhood by making reference to “my affectionate daughter who loves her mother.” With some works intended to raise her own spirits when she felt the setbacks of her efforts for peace, the poems reveal her sentiments as a writer.

Her eldest daughter, Mariko Kurihara, 74, donated the notebooks, along with her mother’s handwritten manuscripts, to Hiroshima Jogakuin University in July 2008. The university then established the Sadako Kurihara Memorial Peace Collection at its library. The university asked poet Mariko Ito, 70, a resident of Tokyo, and other figures who have long ties with Ms. Kurihara, to research the poems to confirm whether or not they had ever been previously published.

In regard to the unpublished poems, Mariko Kurihara said with emotion, “My mother was truly a gentle person and that is why she naturally expressed anger toward the atomic bombing and war. Both sides of her, the gentle mother and the angry poet, made up her real identity.”

Hiroshima Jogakuin University will release 41 of the 86 newly found poems on July 10 in a booklet titled "Umashimenkana" ("We Shall Bring Forth New Life"). The booklet consists of 68 pages in A5 size and 1,000 copies have been printed. The university plans to distribute them for those who are interested with postage paid by the readers. The contents of the booklet can be accessed by visiting the website of the university library after July 10.