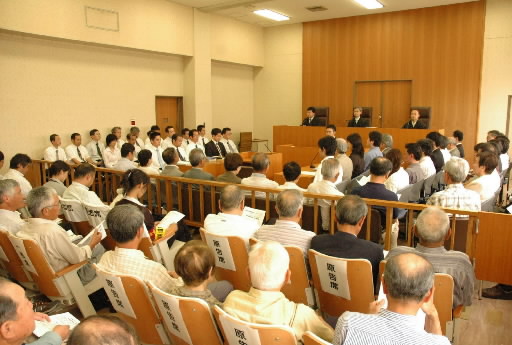 On July 9, the first oral proceeding was held at the Yamaguchi District Court’s Iwakuni Branch for a lawsuit filed against the Japanese government by a group of local residents. The lawsuit was filed by 476 residents in the vicinity of the U.S. Marine Corps Air Station in Iwakuni, Yamaguchi Prefecture. The plaintiffs are demanding a ban on nighttime flights as well as the cancellation of a planned relocation of carrier-based aircraft, which will follow the realignment of U.S. forces. They also demand a total of approximately 550 million yen in compensation for noise damage. At the court, three plaintiffs pleaded their case while the Japanese government demonstrated that it would vigorously contest the lawsuit.

One plaintiff explained that the noise pollution has interrupted their conversations and sleep. “The roar of the jets hits us without warning,” he said. “The citizens here are taking a stand, believing that noise pollution and accidents will only increase if the carrier-based aircraft are relocated to Iwakuni.”

A second plaintiff said, “We are at the end of our patience. I won’t leave this harmful legacy to our children and grandchildren.” Their lawyers, who represent plaintiffs nationwide, including those in Iwakuni and Okinawa, then proceeded with the pleadings.

The 476 plaintiffs all live in the area where the noise registers 75 or higher on the Weighted Equivalent Continuous Perceive Noise Level, WECPNL, or W level, also called the noisiness index. Past lawsuits involving aircraft noise pollution judged that the residents living in the area of 75 or higher on the W level were entitled to receive compensation for damage and undergo noise insulation work for their houses.

The plaintiffs argue that the government-led shift of the runway at the Iwakuni base to a site offshore would violate the original purpose to reduce noise and pave the way for the carrier-based aircraft, apparently leading to exacerbating damage. They also argue that the central government has perpetuated a grave violation of their rights by condoning the roaring sound and other disturbances, causing intolerable mental and physical suffering to the residents in the vicinity of the base.

The plaintiffs’ demands include 1) a ban on flights and the operation of aircraft engines from 8 p.m. to 8 a.m., including aircraft possessed by the Japan Self Defense Force (JSDF), which shares the base, 2) A halt of training exercises by aircraft, such as circling above and rising rapidly into the air over the urban area, 3) cancellation of a planned relocation of carrier-based aircraft, and 4) compensation for the past and future damage.

The Japanese government, however, refuted the plaintiffs’ claim in its statement, saying, “The government predicts that the noise level will be alleviated compared to the current level and safety will be more secure than it is now due to measures involving the carrier-based aircraft relocation plan as well as the Iwakuni base’s move to an offshore site.”

Regarding a halt to flights by U.S. aircraft, including the takeoffs and landings of carrier-based aircraft, “it is beyond the control of the Japanese government,” the statement said. The government, instead, demanded that the claim be dismissed since the effects, such as noise, were “within the limit of patience.” It also urged the court to reject the halt of the JSDF aircraft flights and compensation for damage in the future, based on court precedents.

WECPNL (Weighted Equivalent Continuous Perceived Noise Level, noisiness index, W level)
WECPNL is an international standard used to assess the effect of aircraft noise on human lives. An average figure is calculated based on the number of flights and when the flights take place. The government designates an area with noise of 75 or higher WECPNL for providing subsidies for noise insulation work for houses. The area in the vicinity of the Iwakuni base covers about 1,640 hectares. The central government predicts the area will be reduced to 500 hectares even if carrier-based aircraft are relocated as the runway is moved to a site approximately one kilometer offshore. Meanwhile the areas with noise of 70 or higher will expand mostly over water.