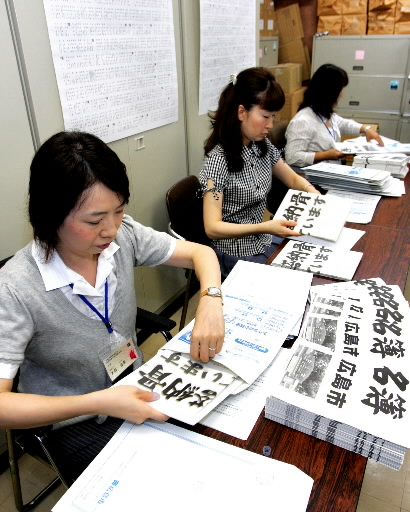 On July 10, the City of Hiroshima sent a list of the names of 820 victims of the atomic bombing to 2,019 places, including municipalities throughout Japan. The remains of these victims are still unclaimed, though their names were identified, and have been stored in the Atomic Bomb Memorial Mound. The city is calling for these municipalities and other organizations to put up the list at their offices between July 17 and the end of October, seeking contact from family members.

The list is ordered according to the Japanese syllabary and is printed on a sheet of paper one meter long and 70 centimeters wide. Considering the age of family members, the city has enlarged the size of the text for this year’s list. To provide further clues, information related to the deceased, such as ages, addresses, and names of schools, is also included.

The city sent the list to the governments of prefectures, major Japanese cities, and municipalities in Hiroshima Prefecture, as well as A-bomb survivors’ organizations nationwide.

The City of Hiroshima has released the list to the public every summer since 1968. With this effort, in some years in the past, the family members of over 100 victims were located. But since 2004, the family members for only nine victims have been located over the past five years.