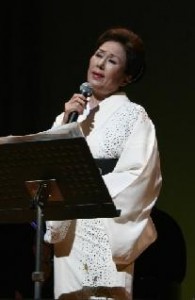 Singer Hiroko Ogi, 64, who is known for her hit song “Shinjuku Blues,” sang a song called “The Children’s Peace Monument” on July 12 at an event to commemorate the 120th anniversary of the establishment of Hiroshima City. The song was featured in her debut several decades ago. Just six months after she was born, Ms. Ogi suffered the atomic bombing at her home in Hiroshima, about 2 kilometers from the hypocenter.

“The Children’s Peace Monument” is a memorable song for her, as at the age of 19, fighting back tears, Ms. Ogi sang the song at the Peace Memorial Ceremony on August 6, 1964. Songwriter Miyuki Ishimoto of Otake City in Hiroshima Prefecture, who passed away in May this year, wrote the lyrics in memory of Sadako Sasaki, a girl who died at the age of 12 after folding paper cranes in the hope of recovering from leukemia.

Forty-five years have passed since the ceremony in 1964. At an event to commemorate the 120th anniversary of the founding of Hiroshima City, held at the International Conference Center Hiroshima, the image of 19-year-old Ms. Ogi was projected onto the stage. The picture was taken when she first sang the song at Peace Memorial Park. In the summer of 1964, she also lost her father.

“Before her death my mother said to me, ‘You must not cry, as all of us are sad,’” recalled Ms. Ogi. After she expressed the determination to share the A-bomb account she heard from her mother, she began singing the song with even deeper emotion.

The lyrics go: “Looking up to the blue sky, the statue of a girl holding paper cranes prays for peace. Let the soul of the young girl rest in peace, though she perished not knowing a gentle spring.”

A hushed audience of 1,200 people listened to Ms. Ogi sing.