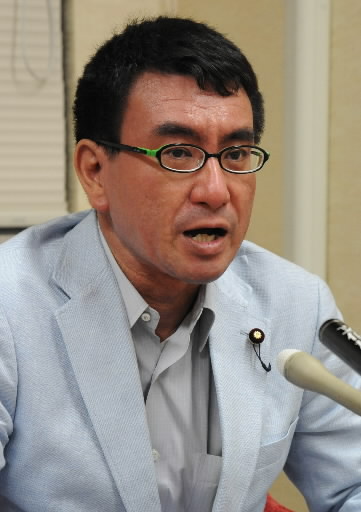 On July 13, Taro Kono, a member of the Liberal Democratic Party and the chairman of the House of Representatives Foreign Affairs Committee, held a press conference in Japan concerning the secret Japan-U.S. pact that outlines the introduction of U.S. nuclear weapons to Japan. Mr. Kono said that the same tired statement by the government, denying the existence of the secret accord, would not be acceptable. He also expressed his intention to suspend deliberations at the committee unless the government provides a new explanation.

After speaking with several people, including former Vice Foreign Minister Ryohei Murata, who has testified to the existence of the secret deal, Mr. Kono came to the conclusion that these testimonies regarding the agreement are highly credible. As “we cannot hold serious discussions” given the government’s current explanation, Mr. Kono announced his intention to pass a resolution at the Foreign Affairs Committee, seeking a revision of the government’s statement.

Mr. Kono also noted the significance of the official acknowledgement of the secret pact, emphasizing, “We will not pursue the responsibility of those providing the government’s explanation in the past, but let the truth lead discussions on how to maintain nuclear deterrence for Japan in the face of threats from other nations, including North Korea.”

At the same time, he admitted that it would be difficult to make the government correct its remark during the current Diet session now that the dissolution of the Lower House is set for July 21 to 24.

According to the testimonies of Mr. Murata and others, successive vice foreign ministers took charge of the secret deal and handed it down to the next vice minister. The deal, which was agreed on during revision of the Japan-U.S. security treaty in 1960, apparently states that Japan will give tacit approval on the stopover of U.S. military aircraft or vessels carrying nuclear weapons.

At a news conference on June 13, Vice Foreign Minister Mitoji Yabunaka reiterated his denial of the existence of the secret agreement, saying, “Japanese prime ministers and foreign ministers have stated that there is no secret pact. This is the government view.” Mr. Yabunaka was responding to a call made by Taro Kono, the chairman of the House of Representatives Foreign Affairs Committee, to revise the government’s statement that there is no covert Japan-U.S. deal on the introduction of U.S. nuclear weapons to Japan.

Regarding a revision of the statement, Mr. Yabunaka negated this idea, commenting, “At this point, the government does not have a new view on this matter.”

Concerning Mr. Kono’s statement that the discussions at the Foreign Affairs Committee will be suspended unless the government revises its remark, Mr. Yabunaka only said: “Such a decision should be made with consideration to the relations between the legislative and administrative bodies and in respect to the time and situation.”