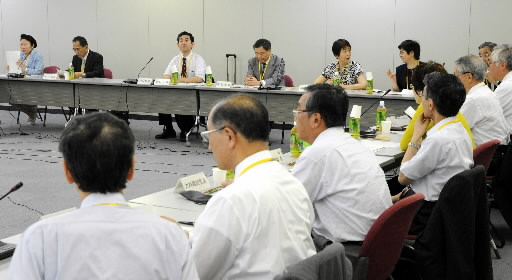 The newly recognized A-bomb disease sufferers consist of four plaintiffs with chronic hepatitis, two with cirrhosis, one with thyroid dysfunction, three with cancer, and four with cardiac disorder.

The plaintiffs with impaired liver function and thyroid dysfunction fulfill the requirements for immediate certification, as they were directly exposed to the atomic bombing within 3.5 kilometers of the hypocenter. The Health Services Bureau of MHLW has not made public the individual conditions of the other cases on the grounds that “If the individual conditions are released, the newly recognized A-bomb disease sufferers will be identified.” The decision at the subcommittee has left 109 out of all 306 plaintiffs of the class action lawsuits unrecognized as suffering from A-bomb diseases under the current A-bomb disease certification criteria, which was adopted in April 2008.

In addition, the plaintiffs and PT demand that cancers and other illnesses that are not included in the immediate certification be recognized as A-bomb diseases based on the individual screening of each case. Atsufumi Miyazaki, MHLW senior officer for health measures, stated, “In light of these claims and the series of judicial judgments, we will determine what the administrative body can do.” MHLW plans to continue individual screenings of the plaintiffs at further meetings of the medical subcommittee.

Other than the plaintiffs of the class action lawsuits, eight cases of thyroid dysfunction whose sufferers fulfill the requirements for immediate certification were recognized as A-bomb diseases.