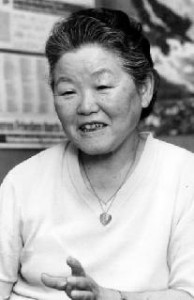 Sadako Kurihara (1913-2005), a writer of A-bomb-related works about Hiroshima, is well-known for her poem “Umashimenkana” (“We Shall Bring Forth New Life”). Eighty-six of her unpublished poems were recently found among the literary materials donated by her family to Hiroshima Jogakuin University. The group of works reveals the arc of her creative activities in which she shared the suffering and sorrow of the A-bomb survivors and continued to pose questions to post-war Japan, where people have enjoyed peace. The lyrical poems among these works also reflect her reputation as a poet of gentle femininity.

The notebooks she used to record her ideas, in which the unpublished poems were found, included works she created in the 1960s and later. After the war, along with her husband Tadaichi who was known as an anarchist, Ms. Kurihara published a newspaper and put particular emphasis on its literary section. For her, creative activity and social activity were inseparable. Amid the Vietnam War, she seemed to sense the vulnerability of Japan’s state of peace, which underpinned U.S. forces.

At the same time, some poems clearly recall the women’s liberation movement of that time and provide a glimpse into one aspect of the poet as a woman and a wife.

In the poem “When a Woman Becomes a Demon,” written in 1969, she says: “My daughter won’t marry, even at 24. She tells me, seeing the lives of her mother and father, that home is a place of constant suffering. Men turn mad, lording their imperial authority over the family. Alas! Where is the notion of putting family first? It’s only an illusion borne of playing house.”

Two other poems were inspired by the monument dedicated to Tamiki Hara (1905-1951). Mr. Hara, also a writer, is well-known for the novel titled “Natsunohana” (“Summer Flowers”), which depicts life in Hiroshima in the aftermath of the atomic bombing, as well as other works.

In “The Monument Dedicated to Tamiki Hara,” from 1966, Ms. Kurihara writes: “One monument quietly stands alone, like the grave of a lonely exile. It stands against the crumbled castle wall, burnt red. The granite wall, faded by time, becomes a peeling mandala. Alone by the wall, the monument is pocked by stones, thrown at its face. Now bruised, like the moon, its graven poem can no longer be read. With a dull, dry sky hanging overhead, even to this day a faint voice can be heard murmuring from the monument: ‘Water! Give me water!’”

Hiromasa Mizushima, 66, professor emeritus of Hiroshima University, reflected on Ms. Kurihara’s life and commented, “She must have empathized with Tamiki Hara, as the monument dedicated to him was damaged even after his death. For her, it seems a symbol of the fate of poets who were not embraced by society.”

Until her later years, she wrote in these notebooks.

“Loss or Recovery,” from 1993, goes: “To recover myself, I slowly take a deep breath. I must fill the void inside. I must await the vigor brimming inside. Running as if haunted, I need time alone. Until the time I recover what has been razed inside me, I will never move, no matter the temptation.”

Over the decades of her peace activities, Ms. Kurihara never bowed to the intimidating letters or threatening phone calls made by right-wing radicals. Still, she evidently had days when she sought to raise her own spirits when feeling low due to illness or advancing age.

Her enduring poem “Umashimenkana” (“We Shall Bring Forth New Life”) is based on a true story in which an infant was born in the dark ruins of the bombing’s aftermath. The poem impresses not simply as a work on the theme of war, but in the humanism proclaimed by the idea of “the birth of life amid death.”

“A love for humanity, never forsaking the perspective of the weak, lies at the heart of the power of her poetry,” said Mr. Mizushima. Thus, Ms. Kurihara detested war, which threatens our loved ones, and her anger served as the driving force for her creativity. In the unpublished poems found recently, Sadako Kurihara’s feelings have been eloquently expressed.

With the blaze bursting from his eyes, mouth and ears,
The Buddhist monk, in flames, joins his hands in prayer.
Men and women, the old and young, gaze on around him.
Hands also in prayer, they glow colors in the blaze.

The fire reveals the black and crumpled leaves of trees.
Before, the burnt trees were torched by chemical arms.
Even the rice paddies were charred black.

We have been burned once, too.
But we have never burned ourselves in protest.
Always passive,
We have been dragged to this place.

Have we ever burned our draft cards?
We have died for the Emperor,
Yet we have never died protesting war.

Peace,
Peace,
Japan at peace, afloat like a bubble.

Below, at the bottom, the heavy sediment of the dead.
The barren city, burned like a black pool.

On July 10, Hiroshima Jogakuin University published a booklet titled “Umashimenkana” (“We Shall Bring Forth New Life”), which includes 41 of the 86 newly found poems. The booklet consists of 68 pages in A5 size. The university is distributing the booklet to those who are interested with postage paid by the readers. The contents of the booklet can also be accessed by visiting the website of the university library.