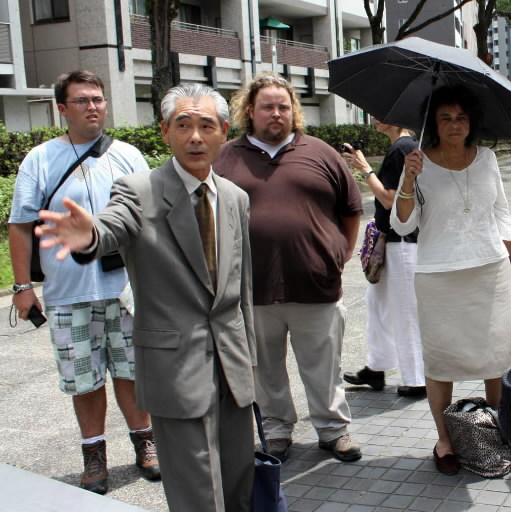 Tsugio Ito, 74, a resident of Hiroshima City, shared his experience with ten U.S. educators on July 13. The American high school teachers, who live in the New York area, were visiting Hiroshima Peace Memorial Park that day. Mr. Ito lost his elder brother in the atomic bombing of Hiroshima in 1945 and his eldest son in the terrorist attacks of September 11, 2001.

After escorting the teachers to the Cenotaph for the A-bomb Victims, Mr. Ito shared his account with them at Hiroshima Peace Memorial Museum. Mr. Ito wore a suit left by his eldest son, Kazushige, who was a bank employee working in New York and died during the terrorist attacks. His son was 35 years old at the time.

Mr. Ito revealed that his son’s body was never recovered. Mr. Ito said that, after the attacks, he went to New York with pictures of his son and searched hospitals there, but was unable to locate him. “Every day my wife and I pray for him at our family altar. What we do for my son is exactly what my parents did for their own son, my elder brother,” added Mr. Ito.

His elder brother, Hiroshi, experienced the atomic bombing at Hiroshima First Middle School (now, Hiroshima Kokutaiji Senior High School), losing his life at the age of 12. Mr. Ito himself is an A-bomb survivor. “My desire to eradicate war from the earth grows each day. We must eliminate all kinds of weapons, not only nuclear weapons,” he urged.

Dalienne Majors, 59, who teaches at a junior high school in the U.S., promised to convey what she learned in Hiroshima, saying, “I feel a strong desire to promote peace. I intend to relate his story to my students.”

The group of teachers is visiting Japan at the invitation of the Japan Society, a private U.S. friendship organization. On July 13, they also spent time with Masahiro Sasaki, 67, a resident of Fukuoka Prefecture. Mr. Sasaki is the elder brother of Sadako Sasaki, a girl who folded paper cranes in hopes of recovering from A-bomb-induced leukemia, but died ten years after the bombing.