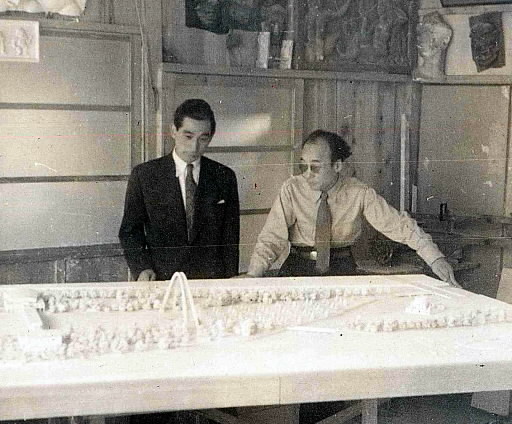 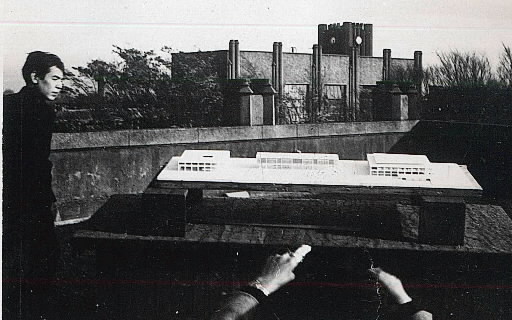 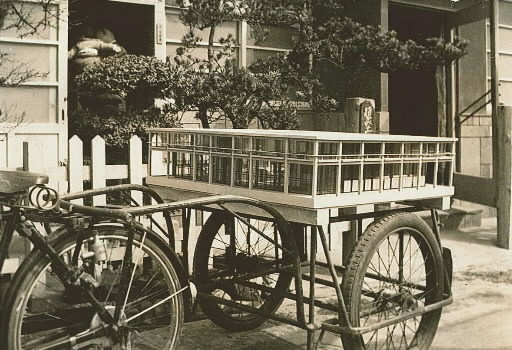 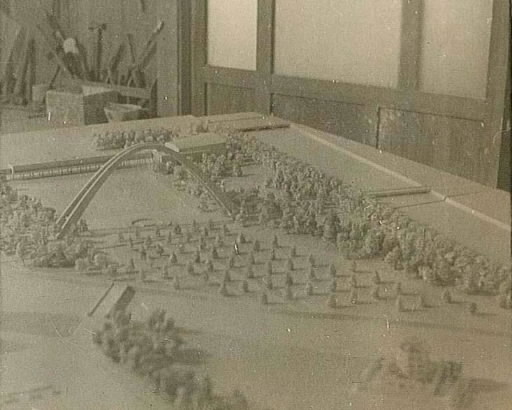 It was learned on July 15 that photos depicting scenes of the designing of Hiroshima Peace Memorial Park 60 years ago have been stored at a company in Tokyo. The park was conceived as a symbol of the revival of the A-bombed city. The ten photos include an image of Kenzo Tange (1913-2005), who later became a world-renowned architect, gazing at a plaster model of the park. An official of the Hiroshima Municipal Archives said, “These photos are a new discovery. They are valuable materials showing important scenes of the reconstruction of Hiroshima.”

The photos were taken in 1949 when the City of Hiroshima was conducting the design competition for the park. Upon the request of Kenzo Tange, then an assistant professor at Tokyo University, a company in Tokyo called Ueno Sekkoumokei Seisakusho Co. preserved the photos. The company made plaster models of Peace Memorial Park and Peace Memorial Museum for Mr. Tange.

The photo in which Mr. Tange studies the model of the park was taken in the company’s workshop from that time. The model includes a huge arch, as a symbol of peace, at the site where the Cenotaph for the A-bomb Victims now sits. Mr. Tange had incorporated the arch into his original design and envisioned it standing 60 meters tall and 120 meters wide.

Another photo shows what is believed to be a design team member pulling a cart which bears a model of Peace Memorial Hall, from the company to Tokyo University. The hall was constructed at the present location of the East Building of Peace Memorial Museum.

This year marks the 60th anniversary of the promulgation of the Hiroshima Peace Memorial City Construction Law, which served as the driving force for the construction of the park. The Hiroshima Municipal Archives will hold a special exhibit on Peace Memorial Park and Kenzo Tange between July 18 and August 9 at Peace Memorial Museum. The exhibit includes letters sent by Mr. Tange at the time he was engaged in designing the park. The contents of the letters were acknowledged this past January and will be shown to the public for the first time.

The Archives, provided with data for making prints, has made a prompt decision to exhibit these newly found photos as well. “These are valuable materials that capture moments when the core site for the reconstruction of Hiroshima would soon be brought to life from the planning stage,” said the official. “We can appreciate the atmosphere of Japan after the war from such things as the workshop and the cart.”