Paper cranes for peace and friendship delivered from Yemen to Hiroshima 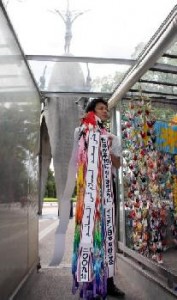 Over 1,000 paper cranes were delivered to Hiroshima from Yemen, a country in the Middle East. About fifty students who are studying Japanese in Sana’a, the capital of Yemen, folded 1,053 cranes with a wish for peace. On July 16, an official of the City of Hiroshima offered the cranes to the Children’s Peace Monument in Peace Memorial Park.

Japanese language courses are conducted by the Yemen-Japan Friendship Association. The students attached a handwritten message to the cranes, the note reading “Birds of peace will fly from Yemen to Japan.”

According to Chika Mitani, 41, who is originally from Aichi Prefecture and has been living in Yemen to teach Japanese as a Japan Overseas Cooperation Volunteer, her predecessor suggested that the students fold paper cranes. This is the third such effort, following those in 2006 and 2008.

Ms. Mitani had to return to Japan for about a month, until mid-June, due to terrorist attacks and kidnappings in the region. Despite her absence, students continued to make the cranes, teaching each other how to fold them. By the time she arrived back in Yemen, roughly 700 cranes had been completed.

Ms. Mitani expressed her hope that the sentiments of the people of Yemen, who had the will to fold paper cranes in the midst of anxiety over possible terrorist attacks, would be conveyed to the people of Hiroshima.