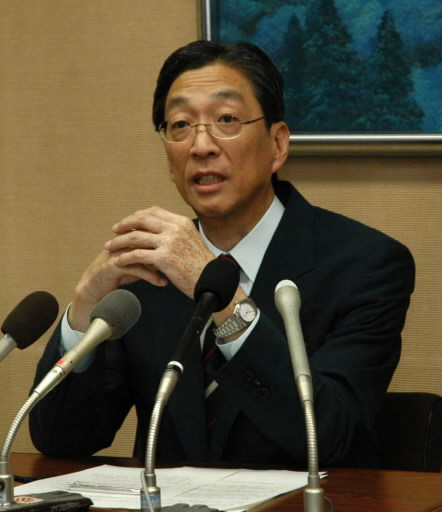 On July 16, Hiroshima Governor Yuzan Fujita announced the intention of the prefecture to withdraw its appeal against the July 2008 Hiroshima District Court ruling on a lawsuit filed by a Japanese man and a Japanese woman in Brazil, who have since passed away. The ruling declared that Hiroshima Prefecture’s decision to reject applications for the Atomic Bomb Survivor’s Certificate, on the grounds that the plaintiffs did not travel to Japan, is illegal. The defeat of the Hiroshima prefectural government will now be finalized.

Osaka Prefecture, which, at the lower court, lost a similar lawsuit involving atomic bomb survivors (hibakusha) overseas in June, did not appeal the court decision, while Nagasaki Prefecture withdrew its appeal against a lower court’s decision on a similar case.

Mr. Fujita held a news conference and stressed that he had made a political decision, saying, “There has been a drastic change in the situation, including the lower courts’ decisions finalized in Osaka and Nagasaki Prefectures. As the A-bombed prefecture of Hiroshima and a prefecture having sent many emigrants to places overseas, Hiroshima Prefecture has put priority on the swift resolution of the lawsuit from the standpoint of providing relief to hibakusha.” He added, “We sincerely apologize for, as a consequence, the hardships caused to the plaintiffs.”

On July 16, Hiroshima Prefecture announced its intention to withdraw its appeal against the ruling on a lawsuit filed by hibakusha in Brazil. The prefecture is seen as having been compelled to follow the decisions of Osaka and Nagasaki Prefectures. Osaka and Nagasaki have accepted their defeats at the lower courts on similar cases.

However, the revised Atomic Bomb Survivors Relief Law, which was enacted in June 2008, has already decided to scrap the requirement that applicants must visit Japan in order to apply for the Atomic Bomb Survivor’s Certificate. Hiroshima Prefecture cited this requirement as a reason to reject granting the certificate to the plaintiffs. An organization supporting the plaintiffs has continuously criticized the prefecture, saying, “Is Hiroshima Prefecture fighting the lawsuit only over a matter of procedure?”

At the news conference, Mr. Fujita revealed his thoughts: “As I was said to have abused my discretion, I wanted to make it clear whether I did so or not. But I came to believe that it would do no good to continue being stubborn.” The decisions of Osaka and Nagasaki Prefectures no doubt heavily influenced his conclusion.