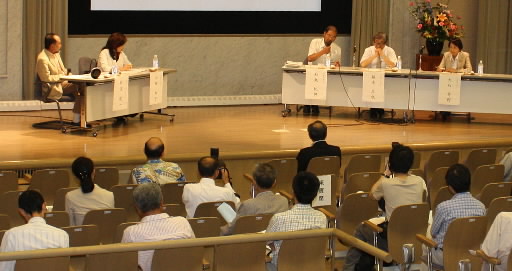 A commemorative symposium to discuss the significance and role of the Hiroshima Peace Memorial City Construction Law was held at Hiroshima Peace Memorial Museum on July 18. The law, which has served as the driving force for the reconstruction of the A-bombed city of Hiroshima, will mark the 60th anniversary of its passage on August 6, 2009. About 200 people participated in the symposium, organized by the City of Hiroshima and other entities.

The law stipulates support from the central government and grants national properties to the City of Hiroshima for constructing a peace-oriented city. Norioki Ishimaru, a professor at Hiroshima International University, gave the keynote speech at the symposium. Mr. Ishimaru remarked, “The law symbolized the reconstruction of Hiroshima as a nationwide hope. It also served as a spiritual backbone for Hiroshima citizens to raise the city up from the rubble of the atomic bombing. To repay its debt for such support, the city has a duty to continue sharing the know-how of its reconstruction efforts to areas of conflict overseas.”

A panel discussion, composed of Mr. Ishimaru, Masaya Fujimoto, president of the Japan Federation of Architects and Building Engineers Association, Yoshino Ono, a photojournalist, and Tomoko Yamada, an associate professor at Hijiyama University, followed the keynote address. Ms. Yamada said, “The philosophy of the law has not permeated to the level of ordinary citizens.” Mr. Fujimoto added, “By taking advantage of the law, I hope that spaces in which peace activities can be conducted might be expanded in the vicinity of Peace Memorial Park.”

A special exhibit on the letters and photographs left by the late Kenzo Tange, the designer of Peace Memorial Park, is being held until August 9 to commemorate the law’s 60th anniversary. The law was the impetus for establishing the park.