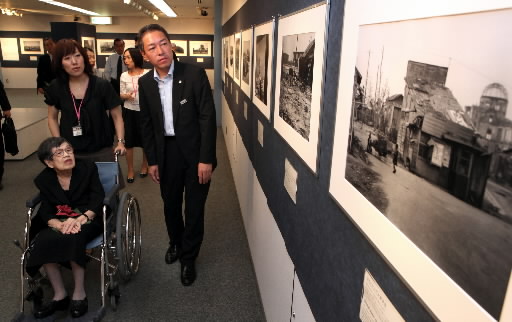 An exhibition of photos by Yuichiro Sasaki, a photographer and a native of Hiroshima who lived from 1917 to 1980, opened at Hiroshima Peace Memorial Museum on July 18. The exhibition, featuring Mr. Sasaki’s images of the devastating aftermath of the atomic bombing as well as the reconstruction of the city, has been organized by the museum to commemorate the 60th anniversary of the promulgation of the Hiroshima Peace Memorial City Construction Law. On the opening day, Kiyomi Sasaki, 88, Mr. Sasaki’s wife, also visited the exhibition.

A total of 101 photos are on display, some of which show Mr. Sasaki’s house, located about 800 meters from the hypocenter, reduced to a pile of rubble, shacks standing in front of the A-bomb Dome, a small child polishing a foreigner’s shoes, and scenes of construction along Peace Boulevard.

Mr. Sasaki’s family donated about 2,200 photos to the museum in 2007 and 101 of these, depicting the city and the daily lives of residents in the 10 years after the bombing, have been selected for the exhibition. Also on display are Mr. Sasaki’s cameras. Guided by the deputy director of the museum, Toshihiko Kunishige, Kiyomi was provided a tour of the exhibition while in a wheelchair pushed by a museum staff member.

Yuichiro Sasaki was from Nishi Kuken-cho (now, Nishi Tokaichi-machi) in Hiroshima. He lost 13 relatives, including his mother and his brother’s family, due to the bombing. Twelve days after the blast, he came back to Hiroshima from Tokyo where he was working as a photographer. His heart set on offering comfort to the victims, Mr. Sasaki devoted himself to taking photos of the devastation and captured more than 100,000 images. In the year following the bombing, he married Kiyomi and she helped him develop and sort the photos for many years.

After touring the exhibition, Kiyomi expressed her hopes, remarking, “My husband took photos of people and the city without staging them in any way. I would like children to understand the true tragedy of war.”

The exhibition will run through December 15 and admission is free.