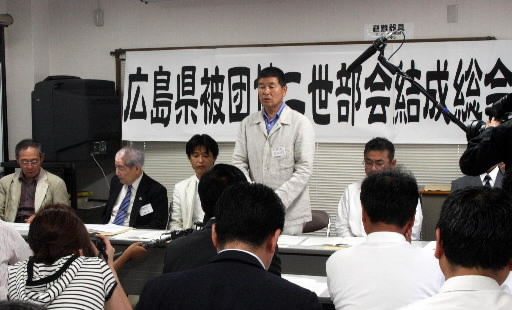 The Hiroshima Prefectural Confederation of A-bomb Sufferers Organization, chaired by Sunao Tsuboi, held the inaugural meeting for the Second Generation A-bomb Survivors Committee in downtown Hiroshima on July 19. The objective of the committee is to keep alive the A-bomb experiences of their parents’ generation in order to advance the campaign for nuclear abolition. The committee has decided to issue membership cards to identify the second generation A-bomb survivors (hibakusha).

Twenty-five people representing local organizations took part in the meeting. Kazuyoshi Yukawa, 62, president of a social welfare corporation, was selected president of the committee. “Hibakusha have little time left,” said Mr. Yukawa. “Let us try hard to listen to the A-bomb experiences of our parents, as well as their hardships and hopes in the aftermath of the bombing.”

The group’s members will carry special membership cards. They are asked to listen to the A-bomb accounts of their parents and write these stories down on the cards. Though a large number of second generation hibakusha reside in Hiroshima Prefecture, they tend not to be aware of their status as second generation survivors. The committee therefore plans to increase its membership by having members carry the cards, which can be used to prompt conversation on the subject.

Currently, the Hiroshima Prefectural Confederation of A-bomb Sufferers has about 1,000 people who are registered as second generation A-bomb survivors. The confederation aims to increase the number to 3,000.

The committee discussed such issues as actively carrying on the peace activities conducted by the confederation and calling for administrative authorities to enhance health check ups for second generation survivors. Chairman Tsuboi, 84, of the Hiroshima Prefectural Confederation of A-bomb Sufferers, said, “I hope the second generation hibakusha will take up our wish to eliminate nuclear weapons and strengthen our activities.”