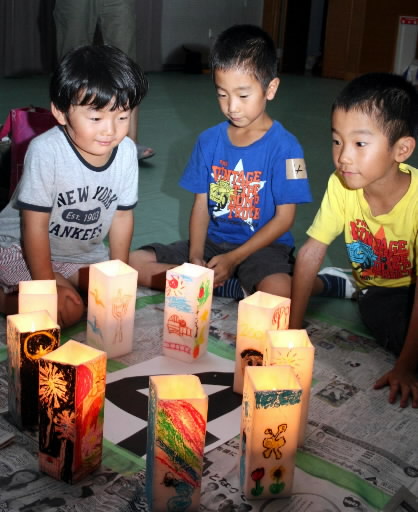 On July 22, about 120 students at Senda Elementary School in downtown Hiroshima made “Peace Candles” to be lit by the Atomic Bomb Dome on the night of August 6. As part of peace education at the school, its Parent-Teacher Association (PTA) initiated the idea.

Each candle is about 20 centimeters tall and each colorful candle was made based on the children’s original designs. After pouring melted white wax into milk cartons, they let the outer surface solidify and created an opening inside for placing a small candle. Then they removed the milk carton and wrote such words as “peace” and painted images like the A-bomb Dome on the surface of the candles.

Kenta Oya, 11, a 6th grader at the school, tried lighting his candle and said, “I painted paper cranes as a wish for peace. I hope that people from many countries look at our candles.”

The activity involving the peace candles was conceived by the Junior Chamber International Hiroshima and started on August 6, 1997. This year, about 4,000 candles were made by students at roughly 40 elementary, junior high, and special-needs schools in Hiroshima City and other areas. On August 6, from 7:00 p.m., these handmade candles will be lit by the Atomic Bomb Dome for about two hours.