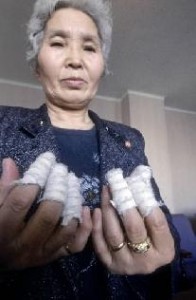 Photojournalist Takashi Ito, 57, a resident of Mie Prefecture, has made a film about a woman living in North Korea who hopes to obtain the Atomic Bomb Survivor’s Certificate. The film is titled “Hiroshima and Pyongyang: Abandoned Hibakusha.” Mr. Ito, who has been covering hibakusha for years in his work, will screen the film at the Hiroshima YMCA Hall in downtown Hiroshima at 2:00 p.m. on August 5. Admission is free.

To make the film, Mr. Ito visited North Korea three times between June 2008 and April 2009. The photojournalist focused on Lee Geson, 67, residing in Pyongyang, and made the 90-minute film featuring her daily life and interviews with her.

Ms. Lee was born in Otake City in the western part of Hiroshima Prefecture. She entered the Hiroshima city center 12 days after the atomic bombing. In 1960, she left Japan to return to North Korea, leaving her family behind. Ms. Lee has suffered from a skin ailment to her fingers and anemia. In November 2007, she planned to visit Japan, applying for the Atomic Bomb Survivor’s Certificate. She had to abandon the plan, however, as the person who tried to accompany her was not permitted to visit Japan, due to worsening relations between Japan and North Korea.

Since the revised Atomic Bomb Survivors Relief Law took effect in December 2008, the Japanese government has accepted applications for the certificate from overseas. However, Ms. Lee has still been unable to apply for the certificate. As North Korea has no diplomatic ties with Japan, there is no Japanese Embassy or Consulate in North Korea, which serve as gateways for the application.

Ms. Lee’s mother entered the Hiroshima city center with Ms. Lee in 1945 and obtained the certificate afterward, before her death this past April. Ms. Lee poses a question to the Japanese government: “I was exposed to the atomic bombing along with my mother. Why can’t the government provide relief to me, too?”