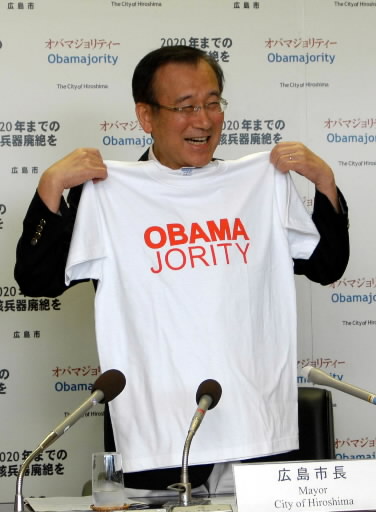 On July 23, Hiroshima Mayor Tadatoshi Akiba held a press conference and spoke highly of Issey Miyake’s article that appeared in the New York Times, commenting, “His article will have a strong impact on public opinion in the U.S.” In the article, Mr. Miyake, 71, a clothing designer, shared his experience of the atomic bombing and urged U.S. President Barack Obama to visit Hiroshima.

Mayor Akiba mentioned that he sent a letter of appreciation to Mr. Miyake, saying, “Mr. Miyake reflected on his soul and decided to speak openly about his A-bomb experience, which he had held quietly for so long. He has spread the spirit of Hiroshima throughout the world, which calls for the abolition of nuclear weapons.”

The City of Hiroshima has posted Mr. Miyake’s article on its website in both Japanese and English. The mayor expressed his hope that the article could inspire President Obama to make a decision to visit Hiroshima.

For the press conference venue, a PR panel for the “Obamajority Campaign,” an initiative to raise public awareness for the abolition of nuclear weapons, was installed for the first time.

The panel, designed by a city official, is 2.1 meters high and 2.7 meters wide, and on it are printed such expressions as “To abolish nuclear weapons by 2020” and “Obamajority.”

With the panel as his backdrop, the mayor presented T-shirts designed by citizens who support the campaign. There are two different designs, one in red and the other in blue. The city will explore the possibility of selling these T-shirts at the museum shop in Peace Memorial Museum and at other locations.