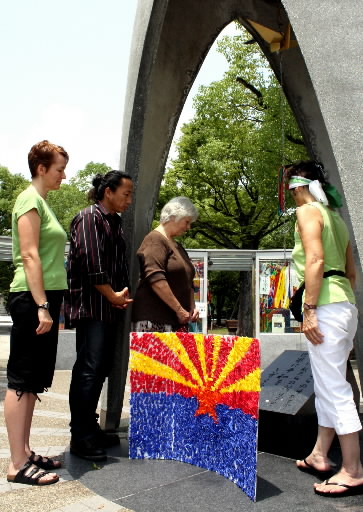 Taiko drummer Ken Koshio, 43, a resident of the U.S. state of Arizona, visited Hiroshima Peace Memorial Park on July 23 to offer a flag made of paper cranes to the Children’s Peace Monument in the park. Mr. Koshio is originally from Nagoya City and he held a series of A-bomb exhibitions in the United States last fall.

The flag, made to resemble the Arizona state flag, is 70 centimeters tall and 100 centimeters wide. The paper cranes, in blue, red, yellow, and orange, are attached to a piece of cardboard.

Mr. Koshio’s taiko teacher once shared his A-bomb experience with Mr. Koshio, which motivated him to take part in antinuclear activities. He held A-bomb exhibitions in six U.S. cities in Arizona between October and December 2008. About 20 local high school students helped organize the events and provided various services such as ushering participants to the venues. While engaged in this work, the students also managed to find time to fold the paper cranes used for the flag. They asked Mr. Koshio to deliver the paper cranes to Hiroshima in person.

Three American taiko drummers who performed with Mr. Koshio at the A-bomb exhibitions in Arizona joined him on the trip to Hiroshima and Peace Memorial Park. They also visited Peace Memorial Museum. “The students in Arizona have a keen passion for peace so they were able to fold 1,000 paper cranes in a short period of time,” remarked Mr. Koshio. “I will continue appealing for the elimination of nuclear weapons and war by combining A-bomb exhibitions and music.”