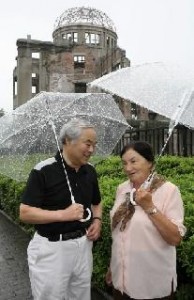 On July 26, Nina Vasilenko, 73, a Ukrainian poet and a survivor of the Chernobyl nuclear accident, visited Hiroshima and met with Keiji Nakazawa, 70, the manga artist of the “Barefoot Gen” series and now a resident of Saitama Prefecture. Ms. Vasilenko is translating all ten volumes of the manga series into Ukrainian. She has completed her translation of volume one and will bring it with her to the Peace Memorial Ceremony on August 6.

In 1986, when the Chernobyl nuclear accident occurred, Ms. Vasilenko was an elementary school teacher in the village of Makalevichi, 75 kilometers southwest of the nuclear power plant. After the accident, the village and its surroundings were designated a “Zone 3” area, a location that has been seriously contaminated by radiation. Many residents subsequently suffered from leukemia and cancer. Her husband was one and he died of cancer in 2000 at the age of 61.

She read “Gen” for the first time in 1991, when one of her Japanese friends gave her a Russian version of volume one. She was deeply moved by Gen’s tenacity in the wake of the atomic bombing of Hiroshima. Circulating the book among local residents who understood Russian, including children, she received the positive reaction that the people felt encouraged by the story of Hiroshima.

In 2004, after retiring as a school teacher, Ms. Vasilenko decided to start translating the series into Ukrainian, thinking, “If the books are in Ukrainian, children can understand them more easily. And, hopefully, those who have suffered from the aftereffects of the accident will read them, too.”

Ms. Vasilenko was invited to come to Hiroshima to attend the celebration party for the completion of the English translation of all ten volumes of “Barefoot Gen.” Walking together with Mr. Nakazawa around the A-bomb Dome, Ms. Vasilenko expressed her appreciation to him. “Hiroshima and Chernobyl share an important bond,” she said. “The character Gen gives me courage.”

Mr. Nakazawa encouraged her work, saying, “Please convey Gen’s positive outlook, despite his hardships, to the many people still suffering due to the accident at Chernobyl.”