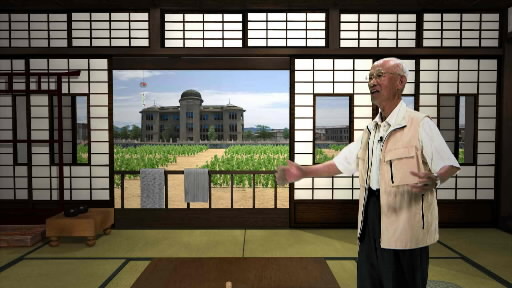 On July 27, the Film Production Committee for the Restoration of Peace Memorial Park, comprised of experts of visual imagery and architectural engineering, presented trial footage of former residents from around the park appearing inside the original buildings which used to stand in the area before the atomic bombing. The committee has been working on a project, using computer animation, that seeks to restore the original appearance of the former Nakajima District, an area of Hiroshima which was annihilated by the bombing and later transformed into Peace Memorial Park.

The images of both the interiors and exteriors of an inn and a shoe store have been combined with images of former residents speaking about their lives before the bombing. One of the residents described the view looking out to the Hiroshima Prefectural Industrial Promotion Hall, now known as the A-bomb Dome, from the restored image of an inn which his family was running at the time. The committee plans to show the film at the Nuclear Non-Proliferation Treaty (NPT) Review Conference next spring.

Related articles
Visitors to Hiroshima Peace Memorial Park to see area’s appearance prior to the bombing (March 11, 2009)
Former neighborhood near hypocenter to be restored through computer animation (Oct. 23, 2008)
ツイート
Return