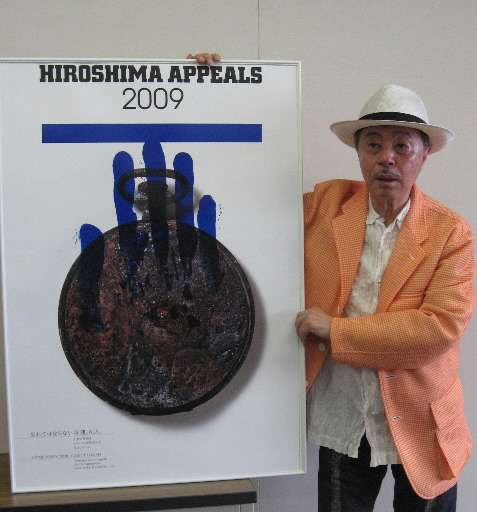 The Japan Graphic Designers Association (JAGDA) and the Hiroshima International Cultural Foundation, chaired by Nobuko Yamamoto, announced this year’s “Hiroshima Appeals Poster” on July 28. The poster is entitled “8:15; the time we must never forget” and incorporates into its design an A-bombed pocket watch to appeal for the abolition of nuclear weapons.

Katsumi Asaba, 69, a director of JAGDA and a visiting professor at Tokyo Zokei University, created the design. The poster combines his handprint in blue with the pocket watch. In using the A-bombed watch, which is displayed at Hiroshima Peace Memorial Museum and was deprived of its hands and numbers in the atomic bombing, Mr. Asaba said, “The watch is a strong symbol of the fact that a nuclear bombing can erase everything.”

Mr. Asaba appeared at a press conference held at Hiroshima City Hall and wore an orange jacket designed by Issey Miyake, 71, originally from Hiroshima. “Watches symbolize human life,” remarked Mr. Asaba. “But on that fateful day, everything was blown away. I hope this poster inspires people to pray for peace.”

Mr. Asaba said he was wearing the jacket to pay tribute to Mr. Miyake, who contributed his A-bomb experience to The New York Times on July 13.

Three thousand copies of the poster--the 12th one--have been printed. The poster will be available for 1050 yen at major bookstores in the city.