Reporters from 11 newspapers converge in Hiroshima to cover peace issues 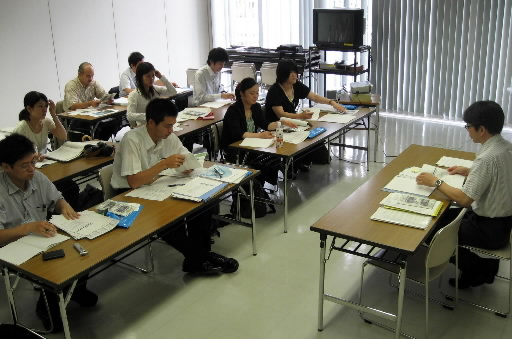 A program for journalists sponsored by the City of Hiroshima began on July 28. The program has invited reporters of regional and local newspapers to Hiroshima to encourage coverage of the atomic bombing and peace issues. The journalists will interview A-bomb survivors and cover such events as the Peace Memorial Ceremony until August 7.

A group of 11 men and women in their 20s and 30s from 11 newspapers make up the program participants. Following the opening ceremony at the International Conference Center Hiroshima, Yoshio Shibata, director of the Hiroshima City Peace Promotion Division, said, “I hope that you will spread the spirit of Hiroshima, a desire for lasting peace.”

The 11 reporters listened to a talk on Mayors for Peace, an organization proposing a roadmap designed to achieve a world without nuclear weapons by 2020, and visited Peace Memorial Museum.

“Ways to hand down the A-bomb experiences are helpful to us,” said Hitoshi Suita, 36, a staff writer at the Kobe Shimbun Culture and Life Division. “We are trying to prevent memories of the Great Hanshin Earthquake from fading with the passage of time.” Eimei Ishii, 27, of the Niigata Nippo News Division, stressed, “Through my reporting, I hope to pursue links between Niigata and the atomic bombing of Hiroshima.”

Until July 31, the reporters will attend a series of presentations, including those on the medical effects caused by radiation emitted by the atomic bombs and the challenges faced by A-bomb survivors residing overseas. On August 1, they will start covering peace-related events.