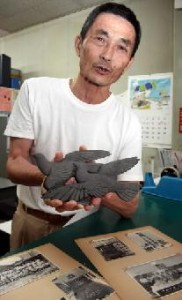 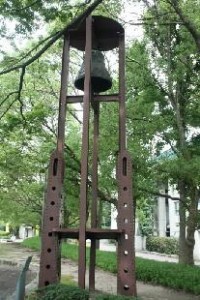 The mold for casting a pattern on the “Peace Bell,” which the City of Hiroshima rang at the Peace Memorial Ceremony in 1949, was donated to the Hiroshima Municipal Archives by the family that had preserved it. With a pattern in the form of doves, a symbol of peace, the mold was used at the test stage of casting the bell and the pattern was attached to the second bell created. The bell now used at the peace ceremony is the fifth one.

Faculty and students of Hiroshima University cast the second bell by melting down metals collected in the ruins of the atomic bombing. However, the second bell tolled only once, in 1949, due to repercussions caused by the Korean War, which began in 1950.

To celebrate the Hiroshima Peace Memorial City Construction Law, promulgated on August 6, 1949, the Hiroshima Copper Alloy Cast Association, comprised of local metal manufacturers, donated the bell to the City of Hiroshima on August 5.

Shinkichi Matsumura, 68, eldest son of Yonekichi Matsumura, president of the association at the time, donated the mold to the archives. “My father and others cast the bell in memory of the victims,” he said. “I hope people understand why the bell was made.” His father passed away in 1993 at the age of 82. Mr. Matsumura also donated such long-held materials as six photos showing scenes of metal being poured into the mold and the ceremony where the bell was donated.

The design of the bell incorporates the doves, the phrase “No More Hiroshimas” in English, and three undulating lines, a city emblem. The association asked Hiroshi Yamamoto, a professor at the Faculty of Engineering of Hiroshima University to cast the bell. Teachers and students under him assisted in the work. Half of the people involved in the project were said to be A-bomb survivors. A-bombed metals were used as a reminder of that fateful day amid the city’s reconstruction. The bell was made in a western style in the hope that the citizens of Hiroshima would transmit peace to the world.

Mr. Matsumura’s father, Yonekichi, lost his father-in-law in the atomic bombing as well as former colleagues at the Hiroshima Army Hospital. “My father expressed some regret that the bell was rung at only one ceremony,” Mr. Matsumura said.

Today the bell is housed in a bell tower that stands just north of the former Hiroshima Municipal Baseball Stadium. Saburo Katashima, 82, professor emeritus of Hiroshima University, was involved in casting the bell. “The bell deserves to be called the ‘Bell of Hiroshima’ since A-bomb survivors and family members of the bomb’s victims made it from the wreckage,” said Mr. Katashima. “I hope one day the bell will be rung again and be made use of by the city.”

Peace Bell
At the Peace Memorial Ceremony on August 6, organized by the City of Hiroshima, the Peace Bell is tolled at 8:15 a.m., the time the atomic bomb was dropped. The bell has been a part of the ceremony since 1947.

The first bell was installed in Peace Memorial Park, but it was stolen in 1951. The third and fourth bells, used between 1952 and 1966, were borrowed from Buddhist temples in the city. The fifth bell, created by the late Masahiko Katori, later deemed a living national treasure, has been used since 1967. On the surface of the bell is the word “Peace” in relief, originally written by then Japanese prime minister Shigeru Yoshida with a brush.