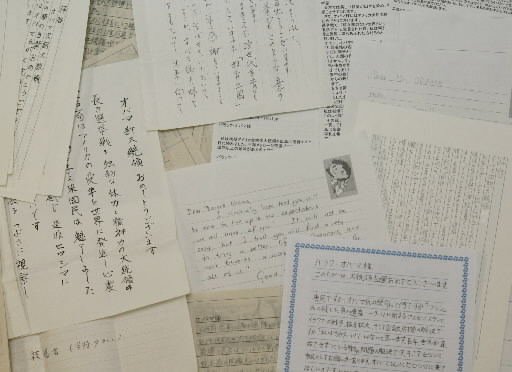 It was learned on July 29 that 335 letters inviting U.S. President Barack Obama to visit Hiroshima have been delivered to the White House. The letters were written in response to a call from “Peace Seeds,” a peace newspaper produced by Japanese teens in Hiroshima and published as a regular insert in the Chugoku Shimbun.

According to the press secretary of U.S. Democratic Representative Dennis Kucinich, Mr. Kucinich handed the letters to an assistant to the president at the White House on July 24. At the same time, he requested that Mr. Obama visit Hiroshima.

In an email to the Peace Seeds editorial staff, Mr. Kucinich wrote: “I think it is important for the President, Members of Congress and the American people to be aware of the impact of atomic weapons on Hiroshima and the adverse impact on world peace. I was very pleased to assist the child reporters of Hiroshima. These interactions bring the citizens of the world together in friendship and understanding. One day, with the efforts of involved children like your young reporters, we will abolish nuclear weapons.”

In the 40th issue of Peace Seeds, published on November 11, 2008, soon after Mr. Obama was elected president of the United States, the junior writers appealed to readers to write letters of invitation to Mr. Obama. A total of 335 letters were written by A-bomb survivors and other citizens, including children. The letters were then translated into English by volunteers both in Japan and overseas, among them students of Punahou School in Hawaii, a school Mr. Obama once attended. Finally, they were entrusted to Mr. Kucinich for delivery to the White House.