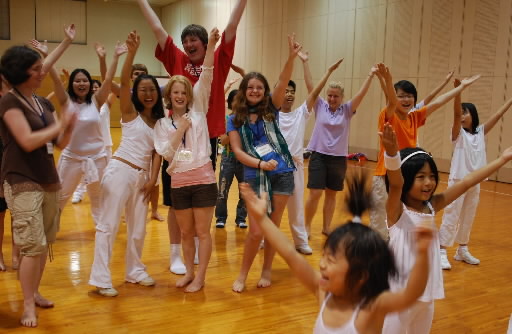 A group of 19 high school students from Hanover, Germany and the U.S. city of Seattle watched a dress rehearsal of “I Pray,” a theatrical performance on the theme of the atomic bombing, at Green Arena in downtown Hiroshima on July 29. Hiroshima students of elementary school and junior high school age have devoted themselves to rehearsals for their performance on August 2. The students from abroad joined the local students in the last scene of the play, singing a song that praises the reconstruction efforts of the city and expresses hope for Hiroshima’s future.

“I Pray” was conceived in 1996 by Yoko Kihara, a second generation A-bomb survivor and dance instructor. The play depicts the tragedy of the atomic bombing and the resilience of the Hiroshima people in rising to their feet again. The students from abroad held their breath in shock at the scene where everything was abruptly and utterly destroyed by the atomic bombing. Just moments before the children had been leading a normal life, playing soccer and running around catching insects.

The German and American high school students are visiting Japan to attend an international exchange program organized by the YMCA. “After watching the play, what I heard from the A-bomb survivors and what I saw at Peace Memorial Museum has filled my heart,” said Lennart Schoen, 18, from Hanover.

The performance will take place at 2 p.m. on August 2 at Aster Plaza in downtown Hiroshima. Admission is 999 yen for elementary school students and above.