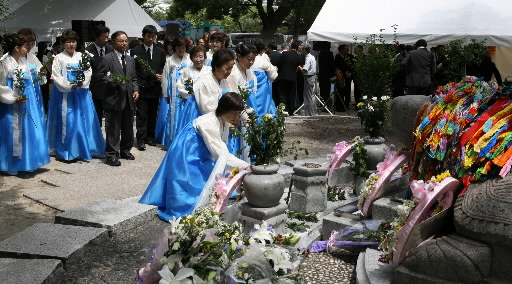 On August 5, the memorial ceremony for Korean A-bomb victims was organized by the Hiroshima Headquarters of the Korean Residents Union in Japan. The ceremony took place in front of the Monument in Memory of the Korean Victims of the A-bomb in Hiroshima Peace Memorial Park. About 300 people, including bereaved family members, took part in the ceremony.

Kwon Oh-won, leader of the Hiroshima Headquarters, dedicated the register containing the names of the Korean victims, now numbering 2,647 with the addition of 14 who died during the past year. Korean ambassador Kwon Chul-hyun was among the attendees and delivered remarks of condolence, stating, “It pains me to think of so many innocent people who fell victim to the unfortunate history of aggression and war.”

A dance was performed by some participants to express a “prayer for the repose of the victims’ souls,” as well as choral singing of a memorial song. The ceremony is in its 40th year and its 11th since the monument was moved inside the park.