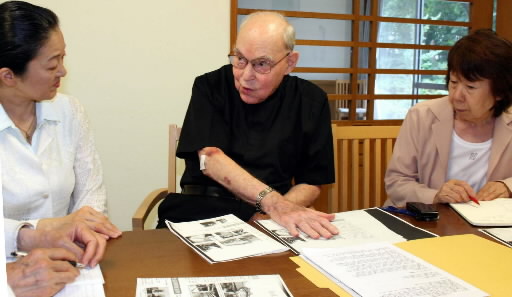 Father Klaus Luhmer, 92, a Tokyo resident and professor emeritus at Sophia University, fled Nazi Germany, became involved in missionary work in the city of Hiroshima, and engaged in rescue operations for atomic bomb survivors (hibakusha) after the blast. Since the war, he has spent his life appealing for the abolition of nuclear weapons as a university professor. A group of five people, including former students of his, have created a 15-minute DVD featuring Father Luhmer in the hope that “Younger generations will learn from his humanitarian outlook.”

Father Luhmer experienced the atomic bombing while at the entrance to the Jesuit novitiate in Asaminami Ward. “I saw something like a large flash of lightning,” he recalls. “I quickly climbed a mountain close to the novitiate and saw the entire city in flames.”

The novitiate stood about four kilometers from the hypocenter. People with severe burns poured into the building, which had withstood the blast. About 80 people were brought into the chapel and library and laid on tatami mats. Under instructions from Father Pedro Arrupe, a Spanish rector and doctor, who passed away in 1991, Father Luhmer removed glass fragments from the bodies of the injured and went out to look for medicine.

Before coming to Japan, Father Luhmer was forced to register with a youth organization supporting Hitler and serve its public relations office. But when his heart cried out that “war is wrong,” he joined the Society of Jesus, which sent him to Japan for missionary work in 1937.

Amid the dire circumstances of post-war Japan, with the A-bomb survivors suffering and struggling to survive, Father Luhmer became convinced that “I was right to choose the priesthood and oppose war.” Believing that education is the basis for peace, he began to teach pedagogy at Sophia University in 1953 and shared his A-bomb experience with his students.

Five graduates of Sophia University, including Masako Ejima, 69, a professor at Meiwa Gakuen Junior College and Father Luhmer’s former student, have been involved in the DVD project. Sixty-four years after the atomic bombing, Father Luhmer talks to the camera with some regret and indignation. “I should have gotten more engaged in campaigns for nuclear abolition,” he says. “In the world today, there are nuclear weapons that are hundreds of times as powerful as the atomic bomb dropped on Hiroshima. If one country uses just one nuclear weapon, it would invite retaliation and the world could be destroyed.”

Still, Father Luhmer holds on to hope. In the year after the atomic bombing, a young man listened to Father Luhmer play the flute in the novitiate. That young man was Father Tadashi Hasegawa, 78, now serving at Hatsukaichi Catholic Church. He was exposed to the blast and suffered burns to his entire body, but he survived thanks to the care of Father Arrupe and others. Father Hasegawa was struck by their dedication and took the same path, becoming a priest after the war.

At news of the DVD, Father Hasegawa vividly recalled listening to Father Luhmer play the flute. “I heard the sound of his flute and felt the joy of life,” Father Hasegawa said. “After the war, we received support from people regardless of their nationality or race.”