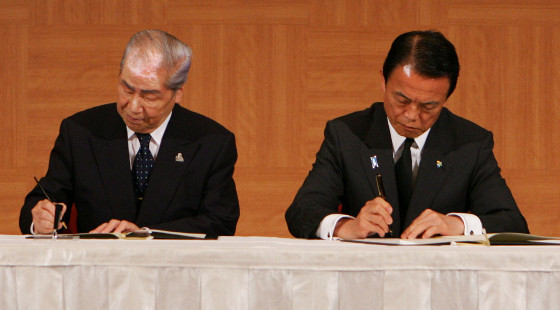 Prime Minister Taro Aso met today with representatives of the Japan Confederation of A- and H- Bomb Sufferers Organizations at a hotel in downtown Hiroshima. The two exchanged a document confirming a resolution to the series of class action lawsuits over A-bomb disease certification. The prime minister attended the meeting following the Peace Memorial Ceremony held on the morning of August 6. The central government, which has lost a succession of these lawsuits, finally responded to the plea of the aging A-bomb survivors (hibakusha).

The document stipulates: 1) Regarding plaintiffs who won their initial trials, both sides agree to respect the decisions of these courts and not appeal to a higher court; 2) Regarding plaintiffs whose cases are currently in court, both sides will wait for a judgment to be made by these courts; 3) The central government will establish a fund through legislation and use the fund to resolve grievances of the plaintiffs; 4) The Minister of Health, Labor and Welfare, the Japan Confederation of A- and H- Bomb Sufferers Organizations, and the plaintiffs and their lawyers will gather for discussions on a regular basis; 5) The plaintiffs and their lawyers will conclude their class action lawsuits.

The central government is poised to provide plaintiffs who lost their cases with settlement money from the forthcoming fund. All 306 plaintiffs will therefore be provided relief.

In signing the document, Prime Minister Aso and Yoichi Masuzoe, minister of Health, Labor and Welfare, represented the Japanese government. For the plaintiffs, two senior officials of the Japan Confederation of A- and H- Bomb Sufferers Organizations, which has supported the lawsuits, served as representatives: Sunao Tsuboi, co-chairperson of the Japan confederation, and Terumi Tanaka, secretary-general of the Japan confederation. After signing the document, Mr. Tsuboi shook hands with Mr. Aso and said, “I’m grateful for your commitment.”

After the signing, Mr. Aso took part in a meeting to hear requests from the hibakusha. “Considering the advancing age of the plaintiffs and the lengthy court cases, I have made the decision to provide relief at an early date,” the prime minister said. “I will also back an initiative for the elimination of nuclear weapons.”

Health Minister Masuzoe, who also attended the meeting, referred to the document resolving the legal row and commented, “These issues will no longer be fought in court. Instead we will resolve such problems at the forum for discussions that will soon be established.”