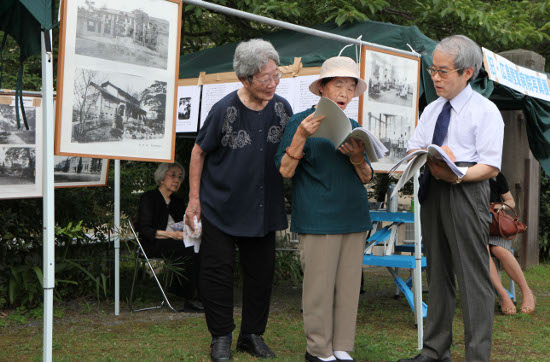 A photo exhibition showing pre-war scenes of the former Hiroshima Army Hospital was held for the first time on August 6 in front of the memorial monument for the A-bomb victims erected at the hospital’s former site. Bereaved family members and others commemorated about 1,600 hospital personnel and patients, all of whom lost their lives due to the atomic bombing. A former army doctor’s son, who collected the exhibition materials and compiled a booklet to explain the photos, distributed copies of this booklet at the exhibition site.

A total of 15 photos taken in the 1930s included images of physicians engaging in surgery, patients undergoing rehabilitation, and a hospital garden filled with greenery. The family members, former colleagues, and local residents looked closely at the exhibition.

Yoshimichi Kudo, 61, a doctor and resident of Kyoto, collected the photos to understand what his father, Kozo, experienced on the day of the bombing. His father was a military doctor and was exposed to the blast while in a hospital ward 800 meters from the hypocenter. Kozo, who had never spoken about his A-bomb experience, died in 2006 at the age of 91.

Yoshimichi donated copies of the photos to Hatsuko Sakuma, 82, a local resident who has been tending the monument. Ms. Sakuma organized the photo exhibition.

He also distributed copies of the 15-page booklet to visitors. The booklet contains copies of the photos and their explanations. He said, “As I conducted my research, I became keenly aware that a large number of hospital staff and patients lost their lives in the bombing. Just like my father, I am a doctor whose mission is to save people’s lives and dropping the atomic bombs was absolutely indefensible.”

Emiko Watanabe, 79, visited the exhibition from Osaka. She lost her sister who was four years older and working as a nurse back then. Seeing images of the hospital wards for the first time, she shed tears and said, “The photos remind me of my sweet sister, who worked so hard.”