Photo in book misidentified as the atomic bombing of Hiroshima 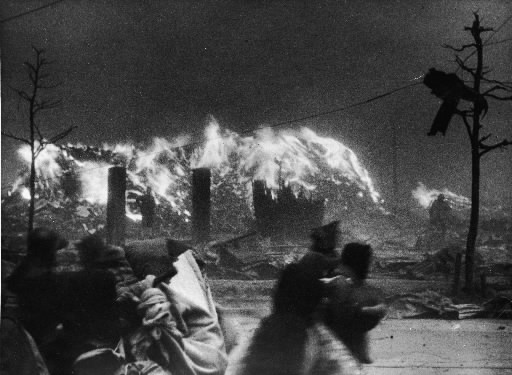 It has been learned that a photo in a widely-distributed book that was identified as depicting the atomic bombing of August 6, 1945, is in fact not a scene from Hiroshima on that fateful day. The book, entitled 100 Days in Photographs: Pivotal Events That Changed the World, was published in 2007 by the National Geographic Society, a world-leading scientific and educational institution headquartered in Washington, D.C., after it and Getty Images, a stock photo company located in the U.S. city of Seattle, selected the photos. Getty Images corrected the caption for the photo posted at its website after people in Hiroshima pointed out the error.

The photo still appears in the third edition of the Japanese version of the book, which was published in October 2008, and uses the same caption as the original edition: “Japanese refugees flee the fires that followed the nuclear bombing of Hiroshima.”

The picture, however, contains a number of elements that cast doubt on this identification.

The points that have been called into question include: 1) Figures in the photo are wearing air-raid hoods and winter clothing. However, the accounts and drawings of A-bomb survivors, as well as the photos taken by Yoshito Matsushige which depict the immediate aftermath of the bombing, show that even the survivors suffered burns to their skin and clothes; (2) The wooden buildings still stand amid the fire--they haven’t collapsed--and the surrounding trees also remain standing. In the atomic bombing, buildings made of wood were blown apart by the blast and buildings within a radius of about 2 kilometers burned down completely. (3) There are no records confirming the identity of the photographer for the photo in question. Thirty-five photos have been confirmed as images from August 6. Among them, 25 photos are of the mushroom cloud.

Hironobu Ochiba, a curator at Peace Memorial Museum, and others have studied the photo and reached the same conclusion. “Beyond any doubt, the photo was not taken in Hiroshima that day,” Mr. Ochiba said. “Such errors may invite misunderstanding among people in the world that the consequences of the atomic bombing were rather trivial.”

In response, an official of the publisher of the Japanese version of the book said, “We intend to change the caption for the next edition. And will we convey the information that we have received to the National Geographic Society in the United States.”

Getty Images, which owns the photo, had posted it on its website with the caption: “Aftermath of the Atomic explosion.” After hearing the findings from Hiroshima, the company changed the caption to read: “Air Raid Aftermath.” A spokesperson for the company said that the caption will be changed, as well, for the same photo posted in a different section of the website

More than a few photos have been mistakenly identified as images which depict the atomic bombing as a result of such photos being confiscated, without notation, by the U.S. Army during Japan’s occupation period.

A similar case took place last year when a U.S. historian posted images on the Internet of “unreleased photos of the atomic bombing of Hiroshima.” The story made international headlines, though it turned out the photos were actually images of the Great Kanto Earthquake of 1923.