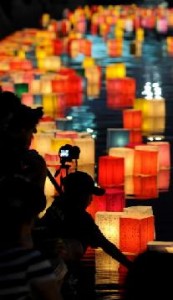 On the evening of August 6, paper lanterns were floated down the Motoyasu River, which flows through downtown Hiroshima, in a ceremony to pray for the repose of the souls of the A-bomb victims and for peace. About 9,000 candle-lit lanterns, in red, yellow, blue, and other colors, were reflected on the surface of the river and the entire setting was hushed in prayer.

From both banks of the river and from Motoyasu Bridge, large crowds watched the long ribbon of light floating out on the water, the lanterns glowing with messages of peace.

Fujie Matsuda, 84, a Hiroshima resident, placed her hands together in pray. “I still don’t know where my mother died,” she said. “Her remains were never found.” On a lantern, Ms. Matsuda wrote: “Please make a peaceful world.”

Franz-Michael Skjold Mellbin, the Danish Ambassador to Japan, participated in the event wearing a wristband that he had made, which appealed against nuclear proliferation. Mr. Mellbin had just climbed Mt. Fuji in the early morning of the same day to protest nuclear weapons development by North Korea and other countries. He commented, “I had to come to Hiroshima on August 6 to make a protest against nuclear proliferation.”