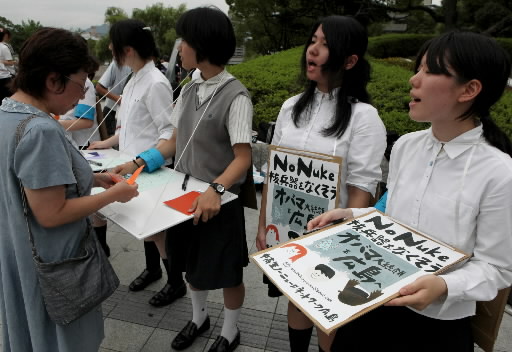 On August 6, the No Nuke Network Hiroshima of Junior High and Senior High Students, a group calling for the abolition of nuclear weapons, launched a street campaign to invite U.S. President Barack Obama to Hiroshima. They plan to deliver paper cranes, collecting a total greater than the number of existing nuclear weapons in the world, to the White House next March and make a request for the President’s visit.

About 30 students from a total of nine junior and senior high schools in Hiroshima took part in the first street campaign on the first floor of the NHK Hiroshima Broadcasting Center Building and around Motoyasu Bridge in downtown Hiroshima. The students hung hand-made posters from their necks and appealed to citizens and tourists to fold paper cranes, calling out, “Let’s invite President Obama to Hiroshima to help abolish nuclear weapons.”

In their two hours of campaigning, all 500 sheets of paper prepared for cranes at the location on Motoyasu Bridge were used up. At the NHK building, parents and children folded paper cranes together and some citizens brought bags filled with paper cranes.

Yuri Nakagaki, 17, a student at Hiroshima Jogakuin High School, felt a sense of accomplishment, commenting, “Looking at all the cranes we collected, I think we’ve made a step forward toward achieving our goal.” Starting in September, they will ask for cooperation from other junior and senior high schools in Hiroshima.