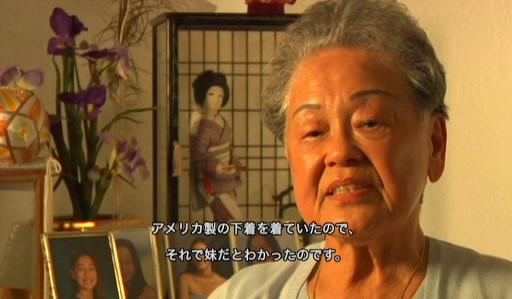 Shinpei Takeda, 30, a Japanese freelance filmmaker living in Mexico, has made a documentary film entitled “Hiroshima-Nagasaki Download,” which features A-bomb survivors (hibakusha) residing in the United States and Canada. A free screening of the film was held at Hiroshima Peace Memorial Museum on August 8.

The documentary shows Mr. Takeda and a friend driving through the two countries and visiting five hibakusha to record their testimonies. One of the survivors, Mei Yamaoka, 80, who now lives in San Francisco, was exposed to the atomic bombing of Hiroshima and lost her younger 13-year-old sister who had been mobilized to dismantle houses to create a fire lane. The film also depicts the uncertainty Mr. Takeda and his friend felt over how to respond to the hibakusha’s horrific experiences.

Mr. Takeda graduated from Duke University in the U.S. state of North Carolina in 2001 and for the last five years has been filming A-bomb survivors living in the United States and in countries of South America. He has collected about 50 testimonies and some have been added to the collection at the Nagasaki National Peace Memorial Hall for the Atomic Bomb Victims.

“Many of the survivors have spent their lives suppressing their grief and anger, due to the lack of understanding by people around them,” Mr. Takeda said. “I would like the people of my generation and younger generations to think about how the atomic bombings have affected human beings.”