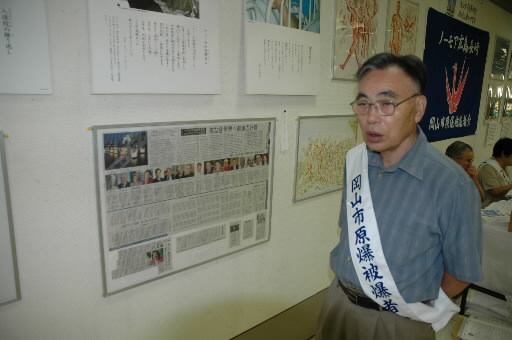 The “A-bomb and Peace Exhibition,” displaying materials related to the atomic bombings of Hiroshima and Nagasaki, opened on August 12 at the Art Space in the basement of Tenmaya Department Store in the city of Okayama. The exhibition is hosted by the Okayama City A-bomb Survivors Association and will run through August 17. One of the exhibits is a panel presenting the “Hiroshima-Nagasaki Declaration,” which was issued by 17 Nobel Peace Prize laureates through the Chugoku Shimbun.

The declaration is being shared at the exhibition to heighten public awareness and build momentum for the abolition of nuclear weapons in the run-up to the Nuclear Non-proliferation Treaty (NPT) Review Conference, which will be held in the United States next spring.

Yutaka Hirasue, president of the association, commented, “The declaration supports the trend toward the abolition of nuclear weapons, which can be witnessed, for example, in the speech given by U.S. President Barack Obama in Prague. I hope everyone, including young people, will come see the exhibition.”

This is the 16th year such an exhibition is being held. Besides the declaration, there are about 90 items on display, including photos of Hiroshima taken immediately after the bombing and pictures calling for peace created by children. Admission is free.