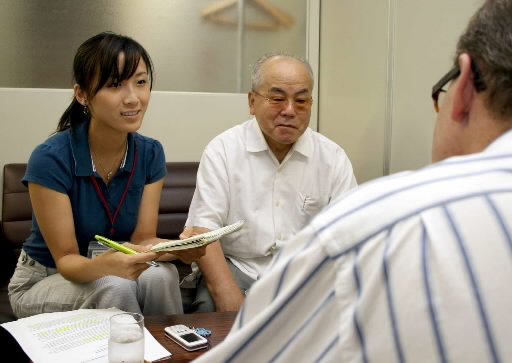 On August 14, Ayano Matsuyama, 24, a graduate student at the Monterey Institute of International Studies in the U.S. state of California, completed her internship at Hiroshima Peace Memorial Museum. Ms. Matsuyama reaffirmed her belief in the importance of abolishing nuclear weapons through her work in translation and interpretation at the museum. She will pursue a career as an interpreter working at conferences and negotiations for nuclear abolition and conflict resolution.

On August 13, Ms. Matsuyama helped an Australian journalist writing a book on the atomic bombings. During his visit to Peace Memorial Museum, she served as interpreter for his interview with Shoso Kawamoto, 75, a resident of Nishi Ward. Ms. Matsuyama took notes as she interpreted Mr. Kawamoto’s account of the bombing, in which he lost his parents and four siblings.

Ms. Matsuyama was born in the city of Hiroshima, her mother’s hometown, and spent her early childhood in Tokyo. One of her relatives died in the atomic bombing. Due to her father’s transfer to the United States, she lived in Atlanta, Georgia from the age of five.

When offered the internship at Hiroshima Peace Memorial Museum by the Monterey Institute, she accepted it without hesitation. “To become an interpreter and contribute toward peace,” she said, “it’s vital to learn about Hiroshima.”

While working at the museum from the beginning of June, she listened to the experiences of atomic bomb survivors and studied the exhibits carefully. She has sent an email to her university asking to hold an A-bomb exhibition there.

Upon the completion of her ten-week internship, Ms. Matsuyama remarked, “I now realize that the tragedy of the atomic bombing could happen today. I would like to speak out about the preciousness of life, considering it my own concern, not just someone else’s.” She will visit the city of Nagasaki on August 15 and head back to the United States on August 20.