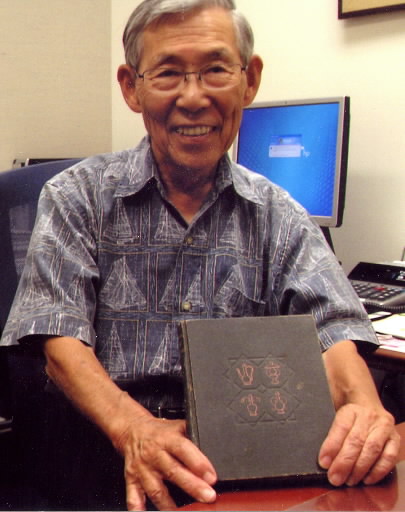 Fumio Miwa, 78, who spent his childhood in Nishi Ward, Hiroshima, and now serves as vice president of a bank in the U.S. state of Hawaii, recently uncovered a diary he wrote around the end of World War II among his possessions at home. At the time he was 14 years old, a boy infused with a military spirit, and he expressed his anger toward the “enemy nation” that had incinerated his hometown with an atomic bomb as well as his reluctance to accept Japan’s defeat. Sixty-four years have passed since the end of the war on August 15, 1945. Reading his diary, Mr. Miwa reflects on the emotions he felt back then.

He found the diary in February 2009 among old documents stored at his home in Hawaii. In 1945, Mr. Miwa was in his second year at Hiroshima School of Secondary Education (now, Hiroshima University Senior High School). He kept the diary for about three months, from July 4, 1945 when he was living in a rural district outside the city, where he had been mobilized for work.

On August 6, when the atomic bomb was dropped on Hiroshima, he wrote with mortification: “I saw the B-29 as it flew to attack Hiroshima…what a hateful sight. If only I had had a fighter jet.” He added: “I heard the enemy attacked Hiroshima with incendiary bombs…I’m worried about my parents.”

After the voice of Emperor Hirohito was broadcast on radio, announcing Japan’s surrender, Mr. Miwa showed no intention of accepting defeat: “To drive away the enemy, the most important thing is the power of youth, the power of students.” The following day, on August 16, he went home to Nishi Ward, where his parents and older sister lived. Though his family survived the bombing, his house had disappeared. “I saw nothing but ashes in every direction,” he wrote. “How dare they do this to us!” He harbored deep bitterness toward the United States.

His father, who had once lived in Hawaii, recommended that he “go see the source of U.S. power” so he left for the United States in 1947. Keeping his bitterness to himself, he went to high school and university there while making ends meet as a dishwasher, among other jobs. After working for a securities firm and a bank, he established a commercial bank in Hawaii with friends three years ago.

Mr. Miwa expressed his gratitude toward American society, saying, “This country gives everyone an equal opportunity.” Looking back on his younger days, he now preaches the importance of reconciliation: “Overcoming animosity and making efforts to understand each other can lead to peace.”