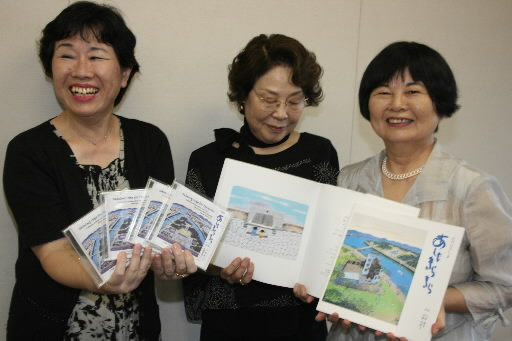 “Hiroshima Speaks Out,” a Hiroshima citizens’ group that creates English translations of A-bomb experiences, has revived a collection of pictures and poems titled “Shining Hope for Tomorrow.” The collection, originally released in book form, introduces A-bomb memorials and A-bombed trees.

The 102 poems written by poet Mariko Ito, 70, a resident of Tokyo, relate the devastation of the atomic bombing and offer tribute to its victims. Each poem is accompanied by an illustration of an A-bomb memorial or A-bombed tree, depicting 100 A-bomb memorials and two A-bombed trees in all. The pictures were drawn by illustrator Morio Yamazaki as a prayer for the repose of the soul of his father-in-law, a victim of the bombing. The book was originally published in 1994, but has been out of print since that time.

In 2006 the collection caught the attention of the members of Hiroshima Speaks Out because the pictures are bright and the poems are easy for children to read. After obtaining permission from Ms. Ito, the collection was made into a CD version, in both Japanese and English, with new descriptions of the memorials added.

During a press conference at Hiroshima City Hall, Ms. Ito said that she hopes a prayer for the dead and a wish for peace will be conveyed to the viewers of the CD. Michiko Hamai, the leader of Hiroshima Speaks Out, hopes people will learn about the tragedy of the atomic bombing through seeing the pictures and poems that reflect the memorials dedicated to neighborhoods and schools.