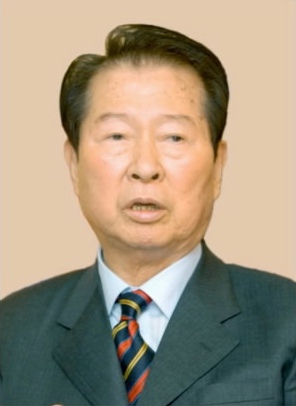 Kim, who had been hospitalized since July 13, died of heart failure at 1:43 p.m., according to Park Chang Il, head of Yonsei University Severance Hospital.

''He was first hospitalized for pneumonia, and later multiple organ failure caused his heart to stop,'' Park told reporters.

Park Jie Won, a close aide to the former president and now an opposition lawmaker, told reporters Kim's wife Lee Hee Ho, his three sons, other close family members and close aides were present at his bedside when he died.

President Lee Myung Bak offered condolences, saying, ''We lost a great political leader today. His accomplishments and aspirations to achieve democratization and inter-Korean reconciliation will long be remembered by the people.''

''I hope that President Kim's lifelong wishes will eventually be realized through reconciliation between the South and North and social integration,'' Lee added in the statement released by the presidential office.

Kim, who spent six years in prison and lived for 40 years wither under house arrest or in exile, was awarded the Nobel Peace Prize in 2000 for his struggle for democracy and to overcome more than 50 years of war and hostility between North and South Korea.

During his five-year tenure as president from February 1998, he spearheaded the so-called ''Sunshine Policy'' in which humanitarian and economic aid was used to broaden and deepen inter-Korean relations. That led to his landmark summit in June 2000 with North Korean leader Kim Jong Il in Pyongyang.

Kim was born in 1924 in a small island in South Jeolla Province when the Korean Peninsula was under Japanese colonial rule.

He was first elected to the National Assembly, South Korea's parliament, in 1961.

In the 1971 presidential election, he managed to capture 46 percent of the vote despite underhanded moves by the ruling party to get then President Park Chung Hee reelected.

During the parliamentary election campaign that followed the presidential vote, Kim experienced what he came to see as the first of at least five attempts on his life by his political foes. A truck rammed into his car, seriously injuring him and his two aides.

After fleeing into exile, Kim was kidnapped on Aug. 8, 1973 by South Korean intelligence agents from a Tokyo hotel where he was staying. The agents were about to dump him from a boat at sea when a U.S. military helicopter made a low pass over the vessel, compelling them to abandon the assassination plan.

He was released in front of his home in Seoul less than a week later and placed under house arrest.

On March 1, 1976, Kim joined other democracy fighters in issuing the ''Independence Day Declaration for Democratization,'' which touched off a wave of pro-democracy demonstrations in South Korea.

He was subsequently imprisoned until 1978 when authorities put him under house arrest again.

Soon after Park was assassinated by one of his close aides in October 1979, Kim had his civil and political rights restored.

But in May 1980, in the wake of a military coup by then Gen. Chun Doo Hwan, Kim was sentenced to death after being accused of fomenting an uprising in the southwestern city of Gwangju, his political stronghold.

The sentence was later commuted to life imprisonment, and then to a 20-year term. In December 1982, his prison term was suspended, and he was allowed to travel to the United States to live in exile.

Returning to Seoul in early 1985, he was again put under house arrest. His return intensified the pro-democracy movement and in June 1987, he was cleared of all outstanding charges and his civil and political rights were fully restored.

After being defeated in the presidential elections in 1987 and 1992, he was elected as president in 1997 with over 40 percent of the vote. It marked the first transition of power from the ruling to the opposition party in South Korea's modern history.

Kim took office in the midst of the Asian financial crisis. He vigorously carried out economic reform and restructuring programs recommended by the International Monetary Fund in the process of achieving economic recovery.

Pursuing a policy of engagement toward North Korea, he and North Korean leader Kim Jong Il agreed their historic summit that Korean unification must be achieved peacefully and at an unrushed pace, following a period in which the two sides work together to expand peaceful exchanges and cooperation and build peaceful coexistence.

The Nobel Committee awarded Kim the Nobel Peace Prize in late 2000 ''for his work for democracy and human rights in South Korea and in East Asia in general, and for peace and reconciliation with North Korea in particular.''

In his acceptance address, Kim said, ''In the decades of my struggle for democracy, I was constantly faced with the refutation that Western-style democracy was not suitable for Asia, that Asia lacked the roots. This is far from true.''

''I believe that democracy is the absolute value that makes for human dignity, as well as the only road to sustained economic development and social justice,'' he said.

Former South Korean President Kim Dae Jung, who passed away on August 18, was one of the 17 Nobel Peace Prize laureates who jointly issued the “Hiroshima-Nagasaki Declaration” through the Chugoku Shimbun this past May. In the A-bombed city of Hiroshima, people are mourning the death of a man who devoted his life to the abolition of nuclear weapons and peace on the Korean Peninsula.

The Hiroshima-Nagasaki Declaration calls on political leaders and citizens worldwide to realize a world without nuclear weapons. Sunao Tsuboi, 84, chairman of the Hiroshima Prefectural Confederation of A-bomb Sufferers Organizations, remarked, “The death of President Kim is a sad occasion, but his wish for peace is solidly instilled in the declaration. We should honor President Kim’s spirit of peace.”

Around the time the declaration was issued, North Korea conducted a nuclear test and launched trial missiles, actions which prompted South Korea to call for adopting a tougher stance against the North Korean regime. Despite these tensions, Mr. Kim, in addition to providing his signature for the declaration, faxed a statement to the Chugoku Shimbun. It read, in part: “I hope that peace-loving citizens over the world are united closely and bring a nuclear-free world to a reality sooner.”

Koichiro Maeda, 60, director of Hiroshima Peace Memorial Museum, lamented Mr. Kim’s death, saying, “His spirit of reconciliation, epitomized in his ‘Sunshine Policy’ toward North Korea, was akin to the spirit of Hiroshima. He hoped to realize a world free of nuclear weapons and lasting peace in Northeast Asia. He could have made further contributions to achieving those goals.”